It was mere minutes after the Delawana from Nova Scotia lost to the Esperanto from Massachusetts in the inaugural International Fisherman’s Cup in 1920 that the idea for the Bluenose was conceived.

The desire for the Bluenose came from the desire to win. Yes, she was also a fishing vessel who would serve her community well (and break records for massive hauls of cod), but her entire conception came from a deeply prideful place.

The Bluenose – and Nova Scotia – needed to beat the Americans. 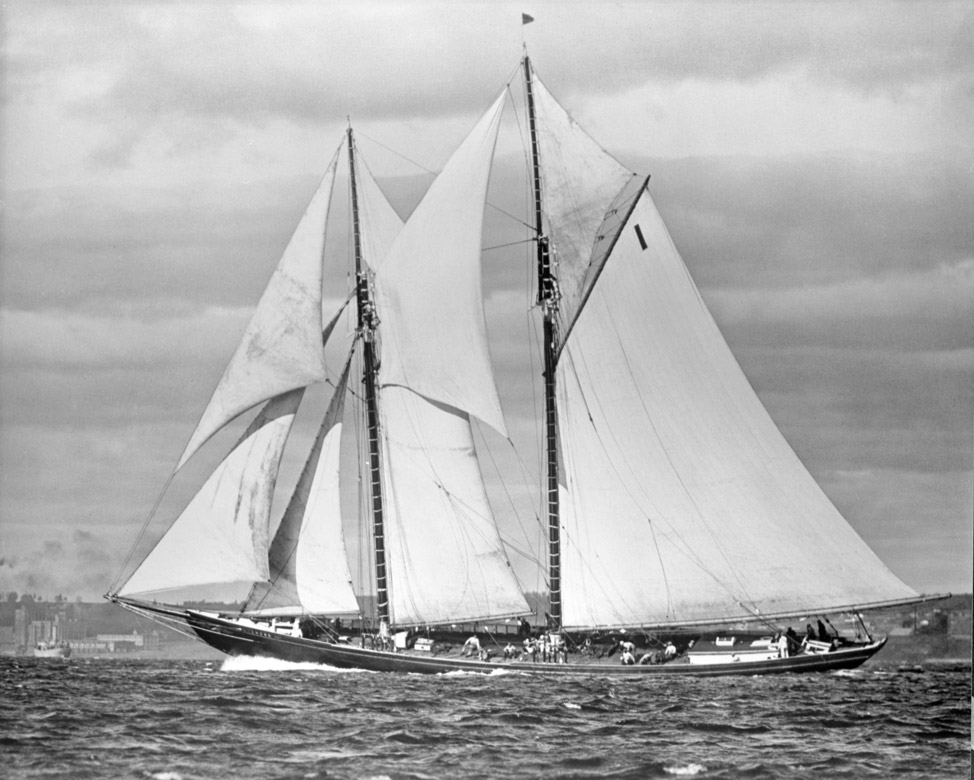 And beat them she did. Designed by a Haligonian and built right in Lunenburg, the Bluenose was built for speed. And with speed, having been completed in just 96 days by using hand tools only. When I asked Captain Phil Watson of the replica Bluenose II why the original vessel was so successful, he narrowed it down to two reasons. For one: the Bluenose was built longer than any other schooner at the time and length contributes greatly to speed. Secondly: she was governed by a badass captain.

Angus Walters led her on the waters the following year and with a triumphant win over the American challenger Elsie, the Bluenose brought the trophy to Nova Scotia. In the years to come, the Americans built new vessels with the sole intent of beating the Bluenose but continuously came up short. The Bluenose remained undefeated in the International Fisherman’s Cup in her 17 years of racing.

Immense fame and notoriety followed. Bluenose was dubbed the “Queen of the Atlantic” and became an iconic symbol for Nova Scotia and for Canada. At his core, Captain Walters was a fisherman and racing champion, facing challenges from the ocean of folk-tale proportions, but then suddenly had to balance his time by meeting and greeting international dignitaries. Bluenose and her Captain became important ambassadors of Canada, thrust firmly into the spotlight.

Bluenose was dubbed the “Queen of the Atlantic” and became an iconic symbol for Nova Scotia and for Canada. 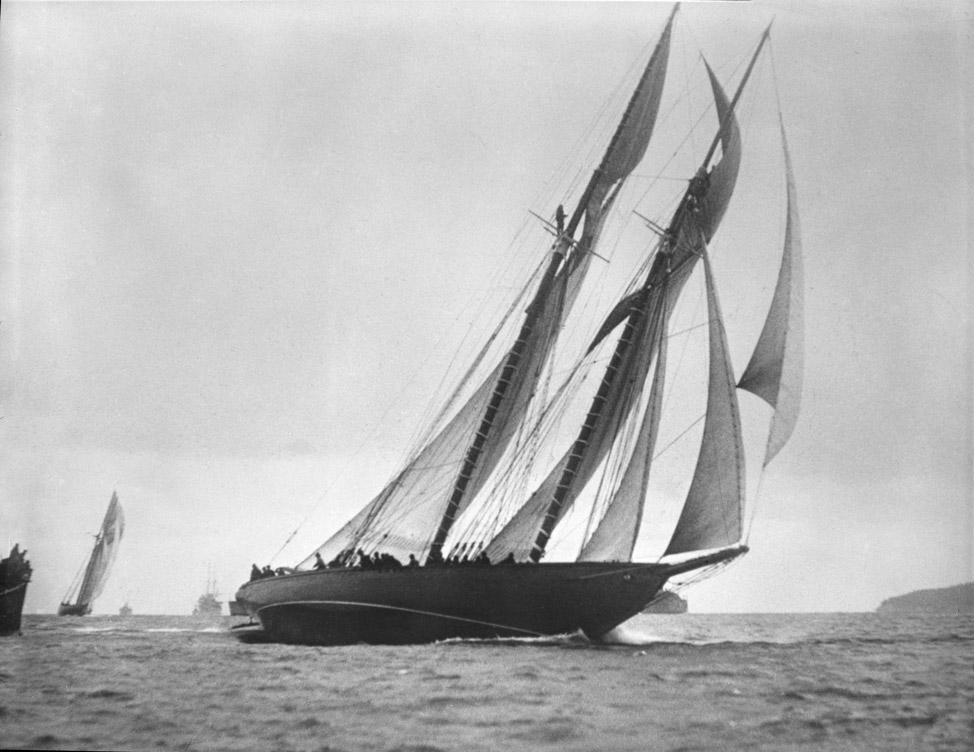 The Bluenose crossing the finish line – Photo by W.R. MacAskill

The continued success of the Bluenose cemented Lunenburg and Nova Scotia’s renowned expertise as shipbuilders. But why, now that we are decades past the “golden age” of sailing, does the story of the Bluenose have such staying power? I asked current Captain Phil Watson.

His answer highlighted two great stories that we can all relate to. For one, there are the epic legends of man vs. nature; in this case, forging the ability to slice through water at remarkable speeds. And second is the story of country vs. country. For a newly-minted nation such as Canada, this was the first real show of skill on an international stage. This was the first time we beat our rivalrous neighbours to the south. And the ship itself, while designed, built, and raced from Nova Scotia, contained elements of the whole country (like the Douglas Fir from British Columbia used to build the enormous masts). The Bluenose wins, and the international acclaim that accompanied them, rippled across Canada and united its citizens in pride.

Of course, the vessel’s infamy is helped by the fact that the Bluenose was immortalized on the dime in the 1930s and has thus graced our pockets and loose change purses since. To this day, the Bluenose remains the only item represented on a Canadian coin that is not from the natural world.

To this day, the Bluenose remains the only item represented on a Canadian coin that is not from the natural world. 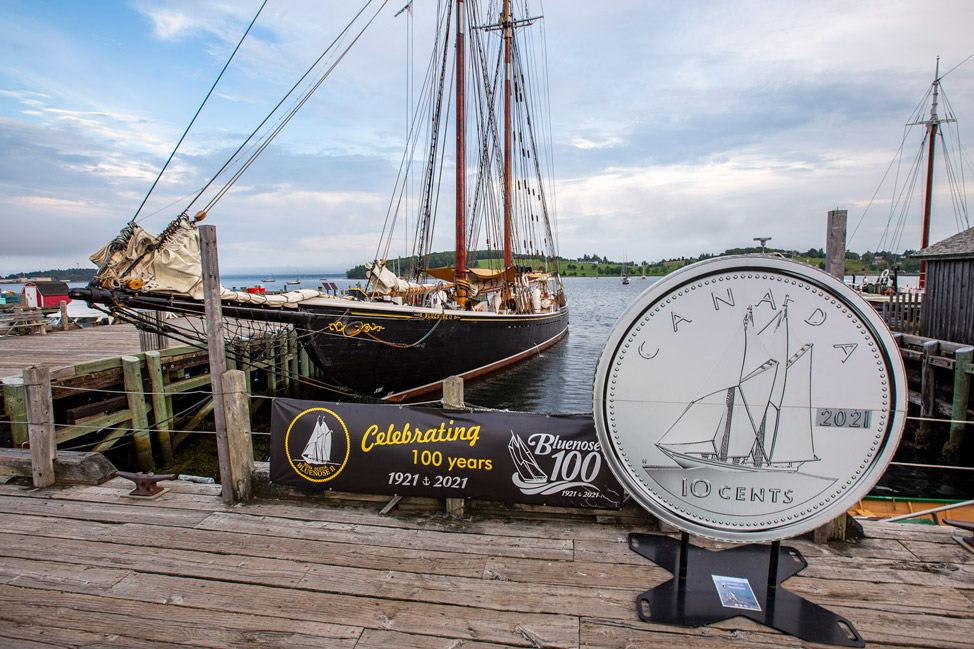 The Bluenose came to her sad demise in 1946. As you might expect, such sailing vessels are expensive and difficult to maintain, and even Angus Walters himself tried to keep her (quite literally) afloat. But when funds ran out, the Bluenose was sold to the West Indies Trading Company in 1942 and worked in the Caribbean Sea hauling fruit. She struck a coral reef and was abandoned there. When Angus Walters heard the news, he was at the curling club in Lunenburg, participating in a bonspiel. The whole community paid witness to his anguish over the loss of a schooner he had dedicated so much of his life to.

But his efforts are still lauded today, especially since the replica – Bluenose II – was built in 1963 by many of the original Bluenose shipbuilders. Angus was invited on her maiden voyage at the age of 82 and upon his first steps on her deck, said two simple words: She’ll do. Those who knew Angus knew that this was the highest honour he could give.

Angus was invited on her maiden voyage at the age of 82 and upon his first steps on her deck, said two simple words: “She’ll do”. 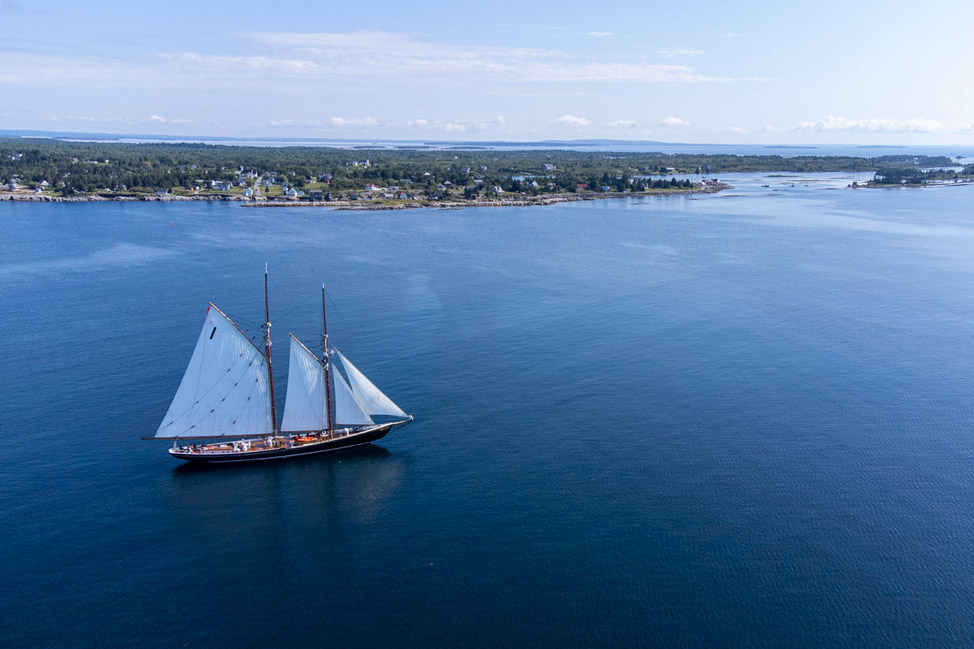 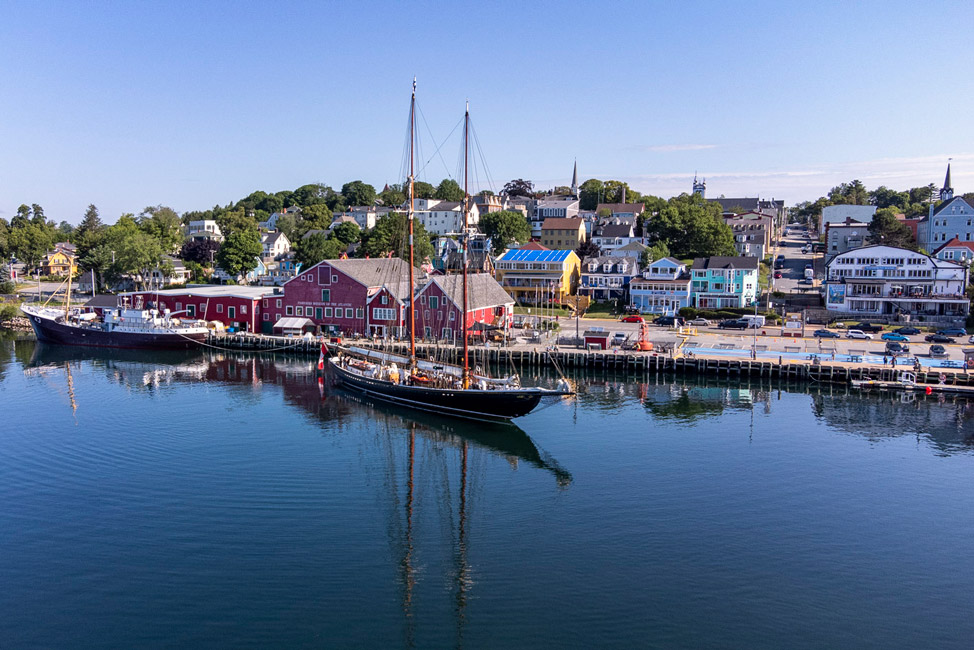 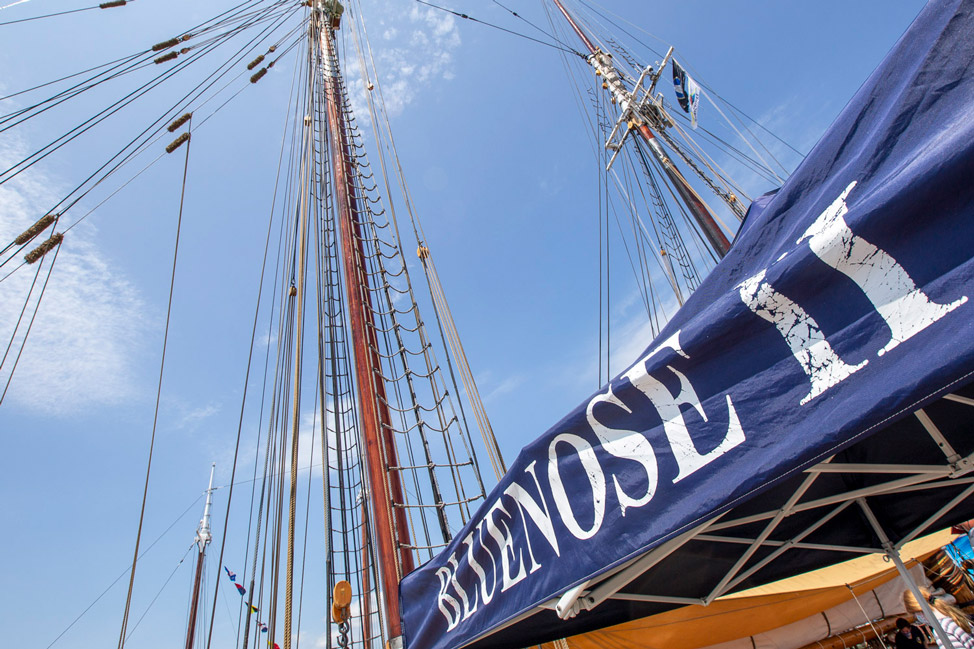 What I can’t help but still wonder: Did they have any idea, at the time, that the Bluenose would be celebrated a century later? That her likeness would adorn everything from currency to beer cans to bags of coffee to teddy bears and beyond? The Bluenose II is not exactly the same ship, although much has been kept the same. The current sails are made by the granddaughter of the person who made the original sails. The towering masts are still made of British Columbia’s Douglas Fir wood. The ingrained scrolls are the same, and many many other details that I won’t recount here.

What matters most, however, is what the vessel represents, and the ripples she still casts. As landlocked Albertans who grew up well after the time of the Bluenose, and thousands of kilometers from where her presence was felt most, our knowledge came mostly from a quick lesson in early school days and this Heritage Minute. It wasn’t until we saw the Bluenose II in person and spoke with those connected to her that we realized how deep the legacy goes.

The crew told us stories of people crying when they walked her decks. While they are too young to have seen the original Bluenose in person, the stories of her told by their grandparents filled their childhoods. Finally being able to experience this piece of living history carried a lot of meaning.

We met Sébastian McSween, the Creative Lead with Amos Pewter, an artisan shop located in nearby Mahone Bay. He worked as a deckhand in the early 2000s aboard the Bluenose II and brought that experience to life in another way, by designing a commemorative piece for the centennial. Rather than simply replicating the schooner’s likeness in pewter, he wanted to incorporate something special into a pendant. On the front: An illustration of the ship’s scroll from the vantage point of the deck. On the back: An imprint of the original winning sails that now sit in a museum. With the sails forbidden to be touched (in order to preserve the fabric), the museum did high res scans of the cloth and turned it into a 3D landscape to make the mold. They specifically included a part with a seam to add more texture.

It wasn’t until we saw the Bluenose II in person and spoke with those connected to her that we realized how deep the legacy goes. 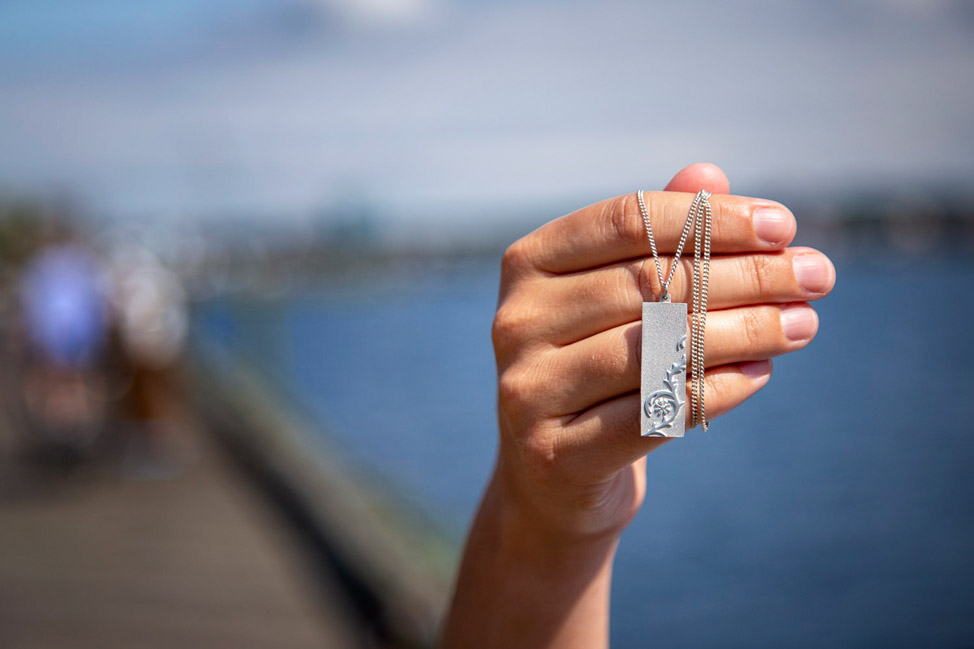 Walking around Lunenburg, the homages to Bluenose are seemingly endless. Ceramic replicas can be found in stores and in home windows. Restaurant menus have items paying homage. We even saw two tourist children with their noses painted blue, excitedly walking up to the vessel for a quick tour on board. We even found out that everyone can track a White Shark named Bluenose (who was first tagged near Lunenburg) as he makes his way around Nova Scotia.

We spent some time at Ironworks Distillery sampling their impressive offer of spirits, produced in a building that was home to marine blacksmiths (who of course served both Bluenose ships) for 111 years. On offer is their exceptional and award-winning Bluenose Rum, rich in caramel and molasses flavour. They also have a Heart Iron Whiskey, named after a specific piece of heart-shaped metal, painted red, that was on both the Bluenose and now the Bluenose II.

We tried the Bluenose Brew from Laughing Whale Coffee, the Bluenose 100 Commemorative Ale from Saltbox Brewing Company, and the Bluenose Lager from Shipwright Brewing. We also sampled the Bluenose Drive chocolate (sea salt flavour, of course) from Lunenburg Rum Cakes. What was most apparent (besides reflecting on how much we love our jobs), was that with everything dedicated to the Bluenose, the quality of all we tasted and savoured suited their purpose. They each paid honour in the most delicious way.

Walking around Lunenburg, the homages to Bluenose are seemingly endless. 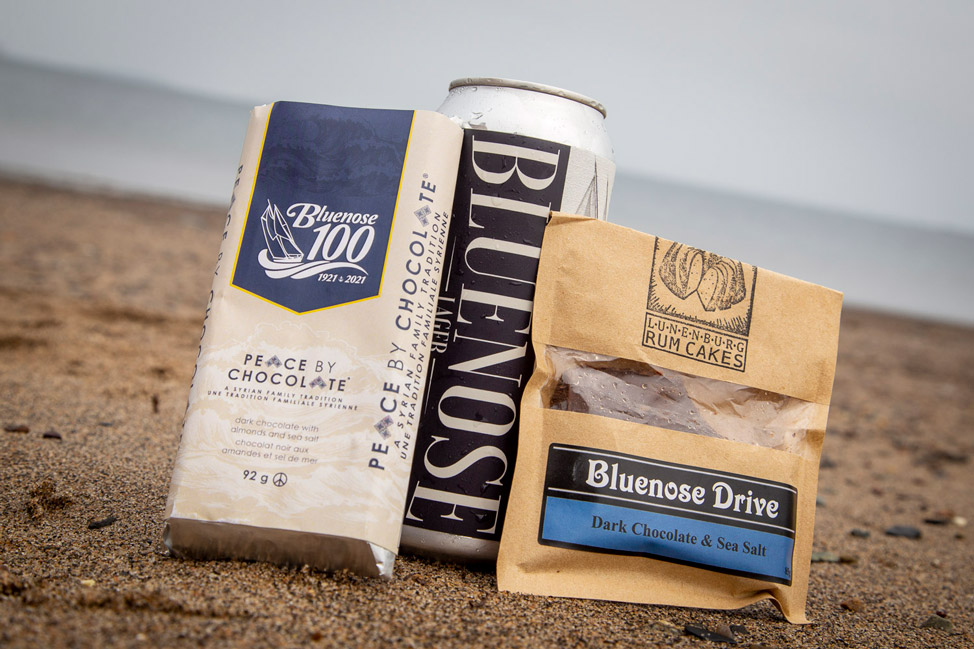 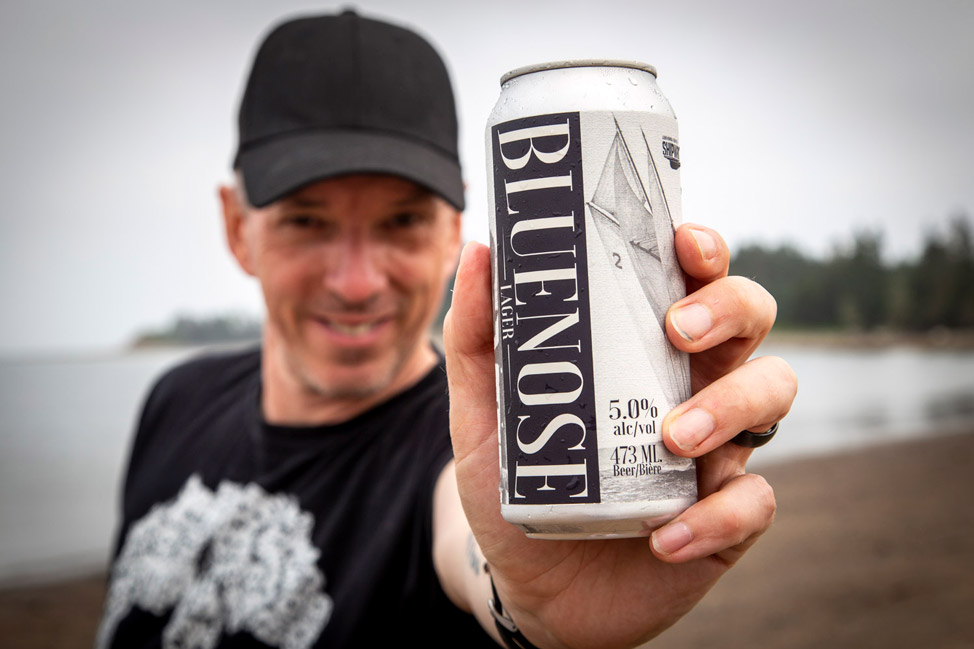 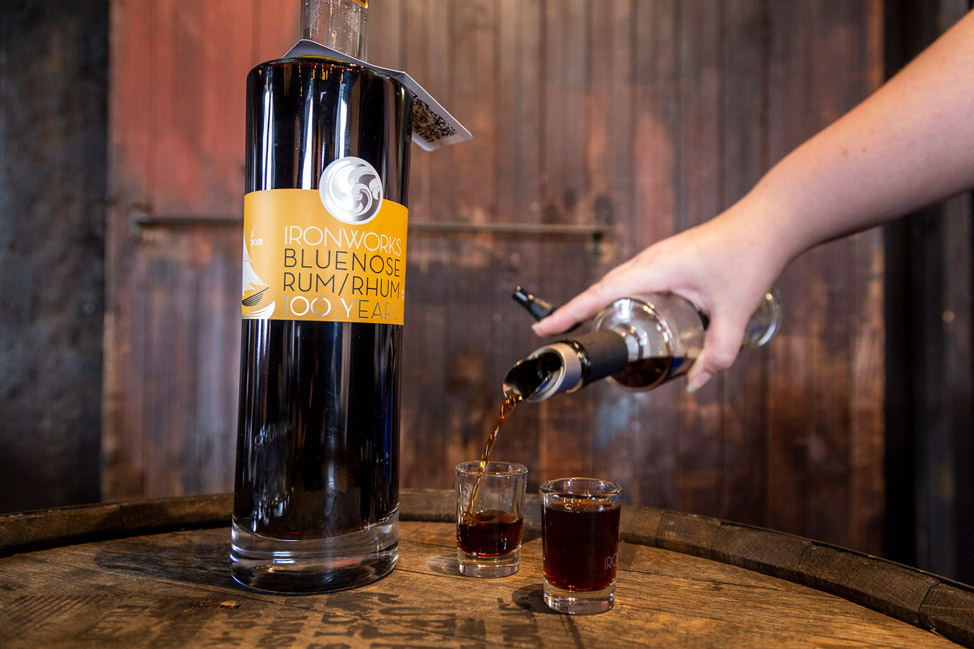 “All Canadians need to make a pilgrimage here, be out with the sails up, and hear the boat creak as it leans,” one local emphasized to us. Current COVID rules meant that such a sailing experience was not possible for us, but our eyes will be peeled for the opportunity to do so in the future. For this most recent visit, we made our way down to see her dockside whenever we could.

On the last day, a crowd gathered to watch her leave the harbour on a crew-training exercise. While the attendees generally skewed older, all ages were represented. The kids with their noses painted blue had returned with their parents to see her off as well. We even drove up the coastline for a while as she glided towards open waters, chasing her with our cameras.

Upon our return to Lunenburg, and in our last few hours in the town before beginning the journey home, we sat for lunch overlooking the harbour. It looked empty without her. The Bluenose shaped a town, a province, and a country – her proud place in our collective history is most certainly earned.

“All Canadians need to make a pilgrimage here, be out with the sails up, and hear the boat creak as it leans,” one local emphasized to us. 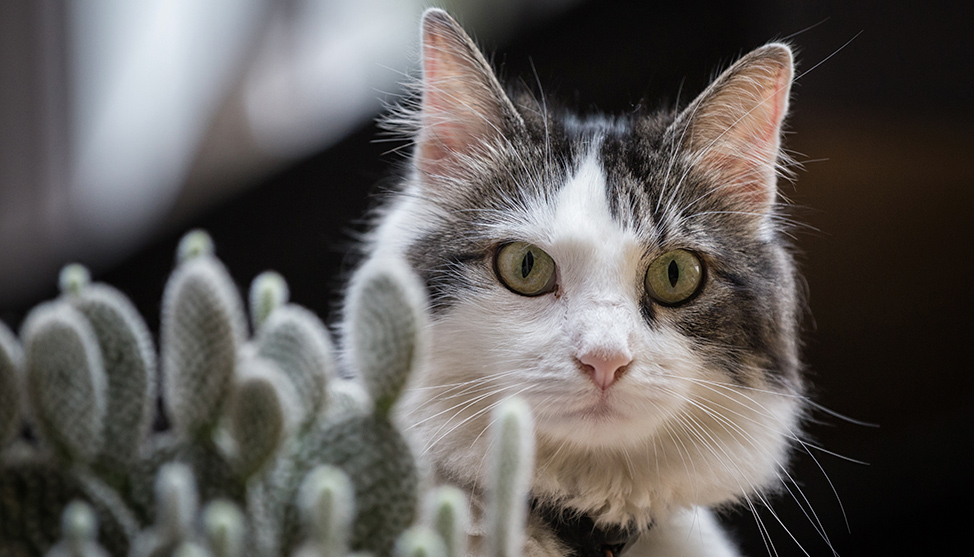