Words by Dalene Heck / Photography by Dalene & Pete Heck
I stood back armed with cameras while Pete made his way to the base of what would be a tower of humans. He placed his hands on the shoulders of a stranger in front of him and spread his legs slightly to anchor his feet and allow for more force to be applied forward.

He would tell me later that he was told not to look up and to just push. Was he pushing too hard? Or not hard enough? he wondered as the entire base (called a pinya) began to lean in.

I moved in until I was right behind Pete, and even though I was not directly a part of it, the intensity was arresting. The hush was broken only by heavy breathing and ardent calling of instructions by the captain. Inside the base, dozens of faces were pressed into dozens of backs, and in the middle, arms were outstretched to support the second layer of humans, who would support six more layers above them.

Each body held a purpose. The larger the pinya, the more weight the human tower can sustain and the higher it can rise. Both Pete and I were surprised by how smoothly and quickly the assembly occurred, as more people climbed over others to make another layer. The size of the ascending humans decreased the higher the tower rose until the final person to clamber to the top was a small girl who couldn’t have been more than six years old. She expeditiously chose her path of least resistance to the top. Once there, she raised her arm and four fingers to represent the Catalonian flag, crossed over, and came back down the other side. At the bottom, she lept into the captain’s arms, was set onto the thick mats that lined the floor, and received high fives as she strutted back to the waiting area. She was the rock star, and she knew it.

The hush was broken only by heavy breathing and ardent calling of instructions by the captain. 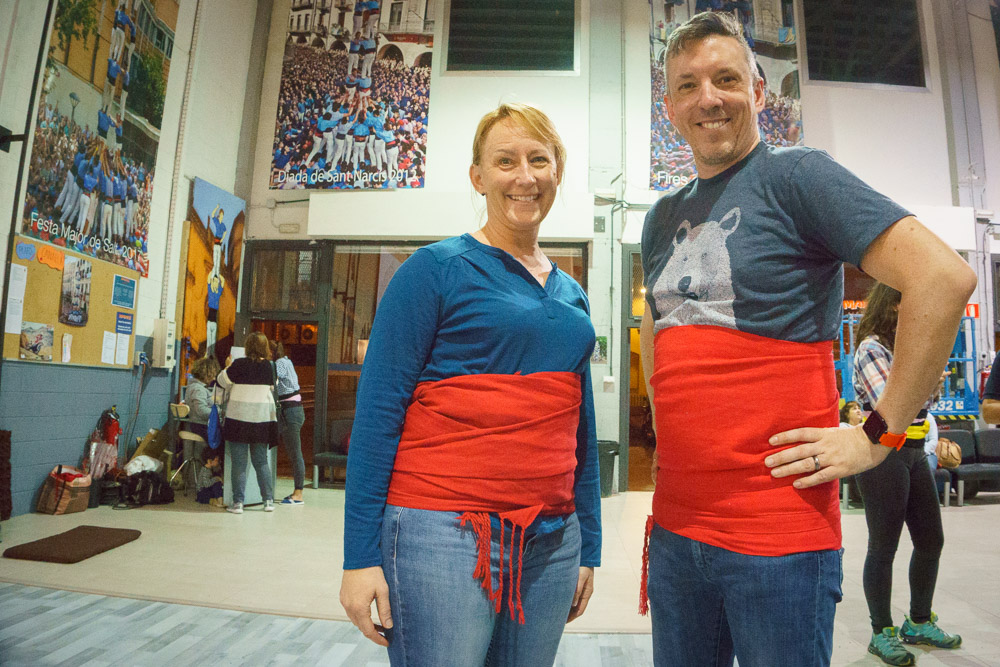 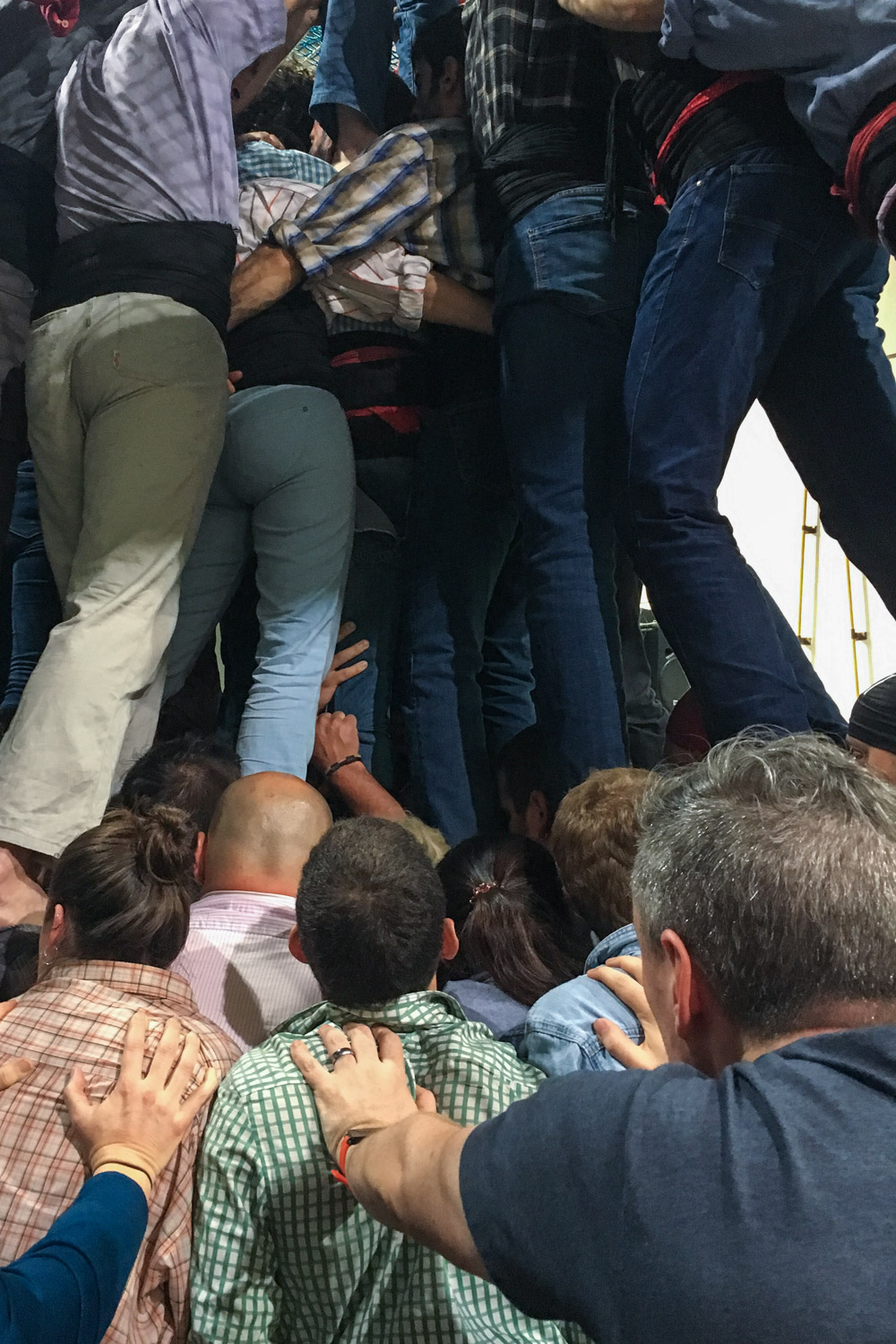 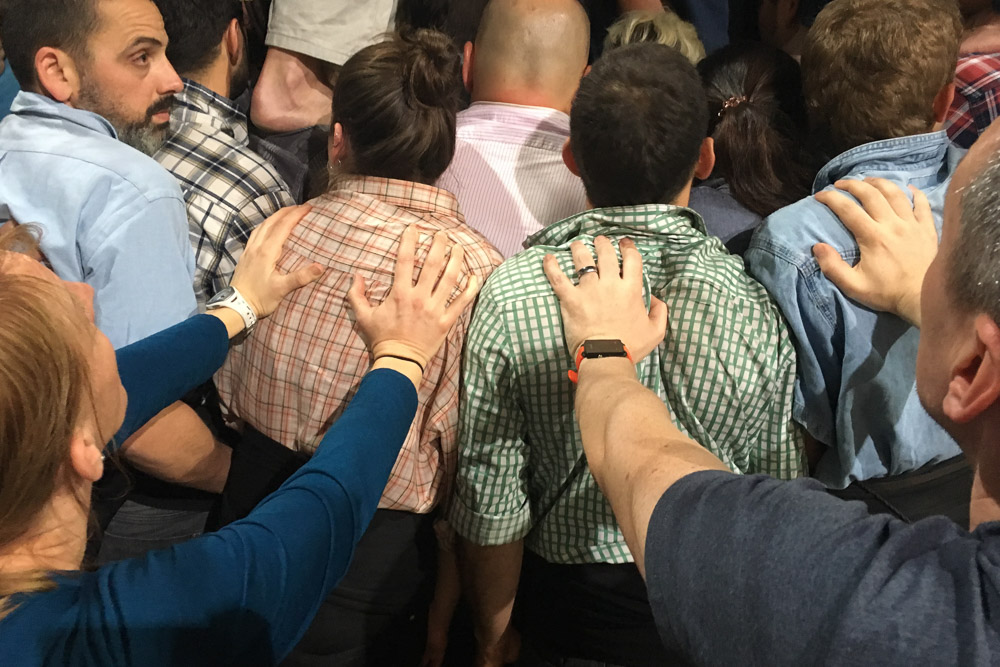 Caught me looking up, bad Pete!

It was after 10pm when this group of hundreds, Team Marrecs de Salt, the largest in Girona, finally disbanded for the night. They had erected over a dozen tower formations in a couple of hours of practice, never the same one twice, and waiting outside for them was a line of grills that had been cooking their dinner. The group was jovial and loud.

“My whole family is involved,” Ona told us. At 22 years old, she had been a part of a castell team for 10 years. Her parents balked at letting her join but she would not relent until they did. Later her entire family became members of the local group in the small city of Olot. “It takes up a lot of time so it is good to do it together,” she said. Ona is now on her own, attending university in Girona, but sought out a team as soon as she arrived.

The excitement is what keeps her involved. “There is always adrenaline – even if you aren’t going up. You see a lot of people crying at the end because it’s something that you have worked hard on. People spend their whole lives doing this and it can be very emotional. It’s a sense of pride.”

“People spend their whole lives doing this and it can be very emotional. It’s a sense of pride.” 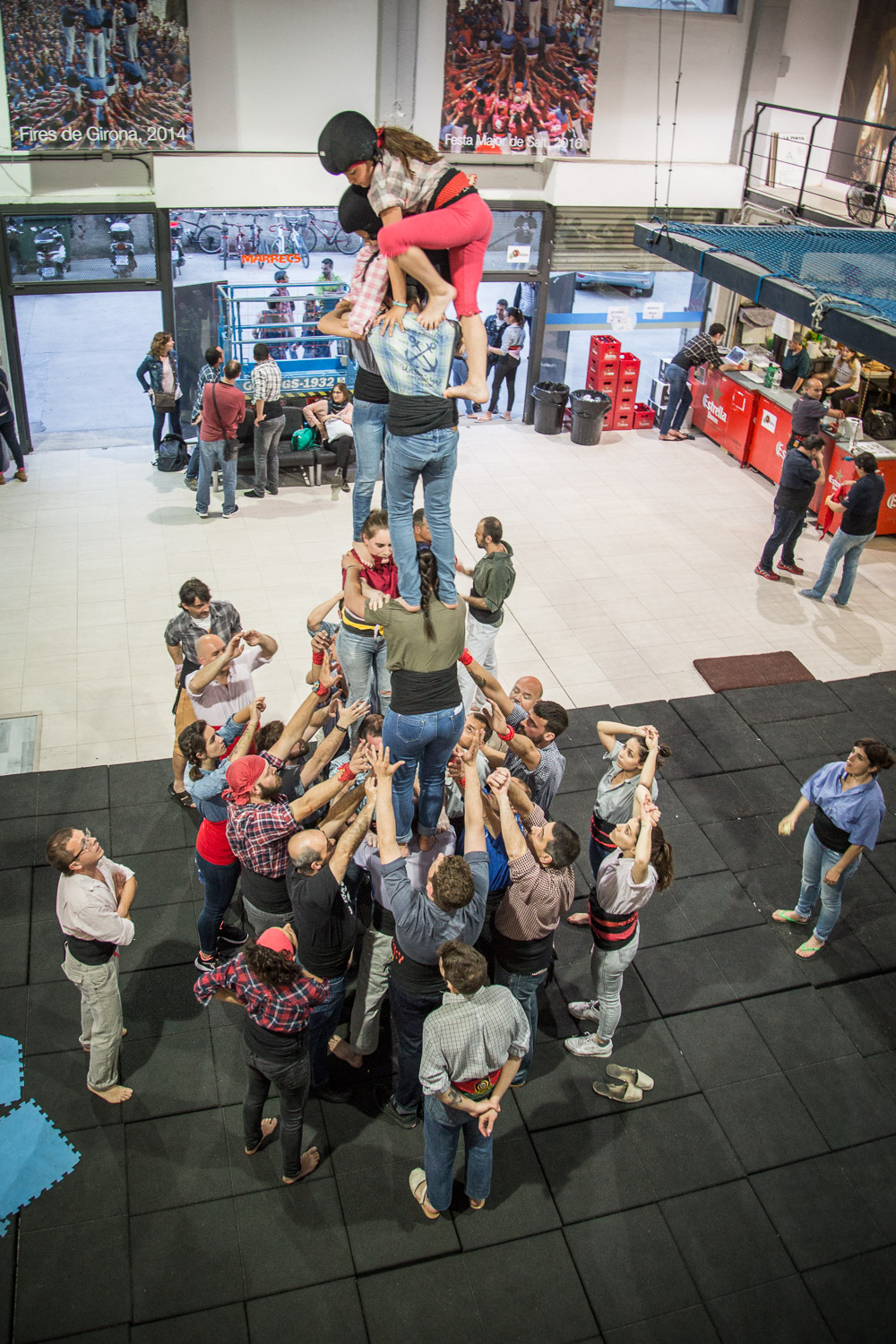 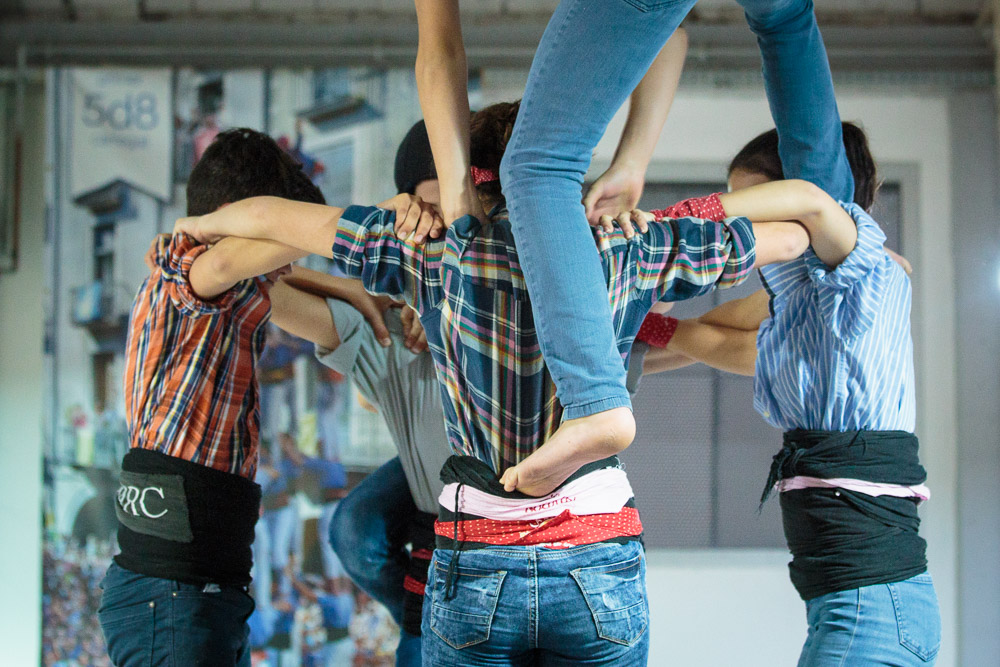 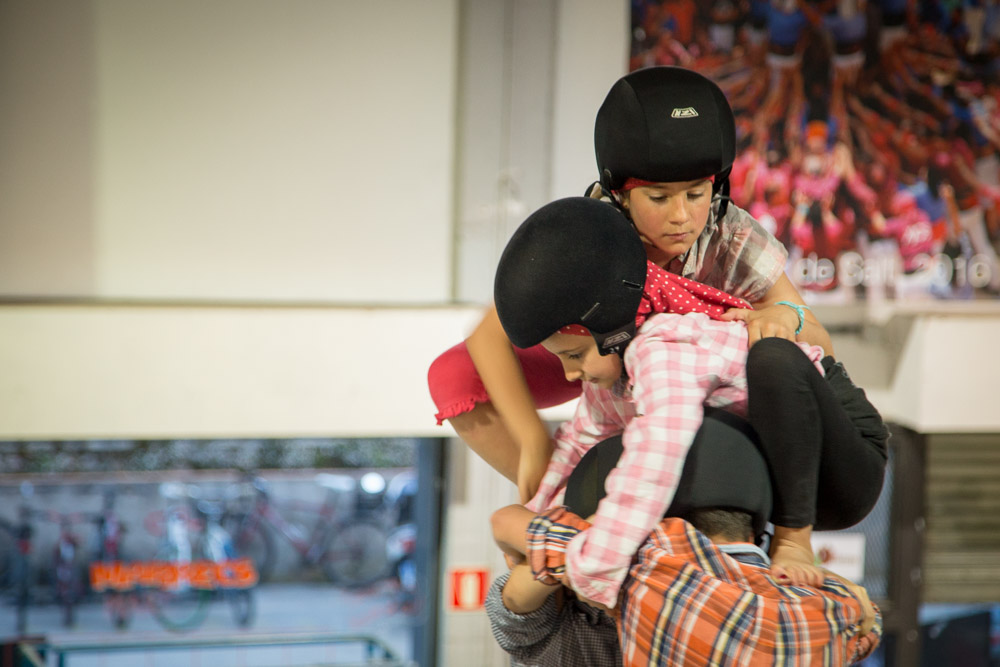 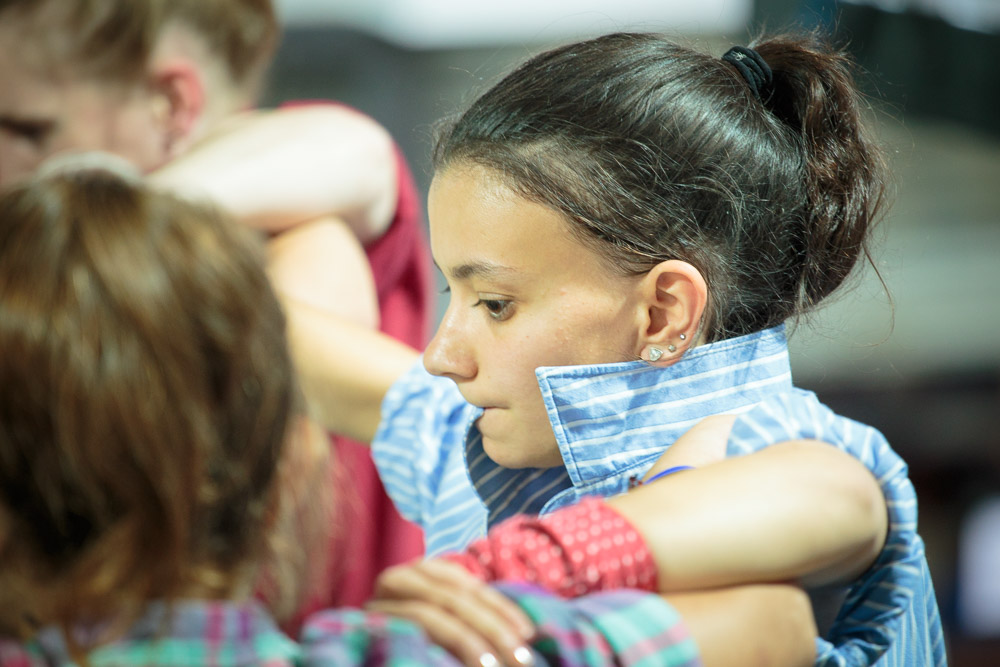 Ona is quite small in stature and can play a variety of roles. We saw her up on the third row in one tower, but sometimes she is also in the pinya, which was a surprise to us as she seemed too tiny to hold much weight on top. When in the base, she wedges herself in under a bigger person’s armpit to provide support, like a crutch.

There is an unmistakable intimacy about the whole experience and a story to be told about its contribution to society as a whole. Hundreds of would-be strangers, smushed together so that air barely exists between them, all with the common purpose to rise up. The first documented castell dates back to the early 18th century but gained popularity in the 1960s and 70s, when Franco’s dictatorship was instead trying to suppress such cultural activities. When he died, the towers returned in full force. In the 1980s, women were allowed to participate for the first time; their presence is credited with the ability to build lighter and stronger towers that can now reach greater heights. Symbolism abounds.

And it’s not even for competition that these large teams exist, except for within themselves, to execute the towers cleanly, safely, and on time to the music that plays for them. Although there is one big competition called the Concurs de Castells that runs every two years in Tarragona; it is a judged event where teams are awarded points based on difficulty, height, and ability to follow protocol. Otherwise, you will find teams prepping for events like the flower festival in Girona, which is where we saw the Marrecs de Salt perform next.

There is an unmistakable intimacy about the whole experience and a story to be told about its contribution to society as a whole. 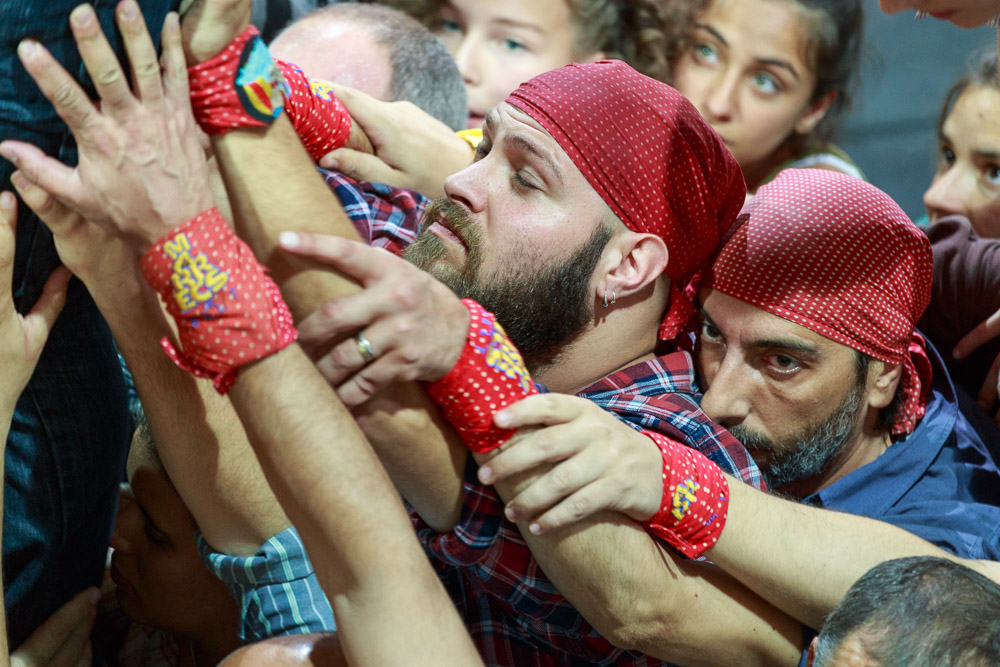 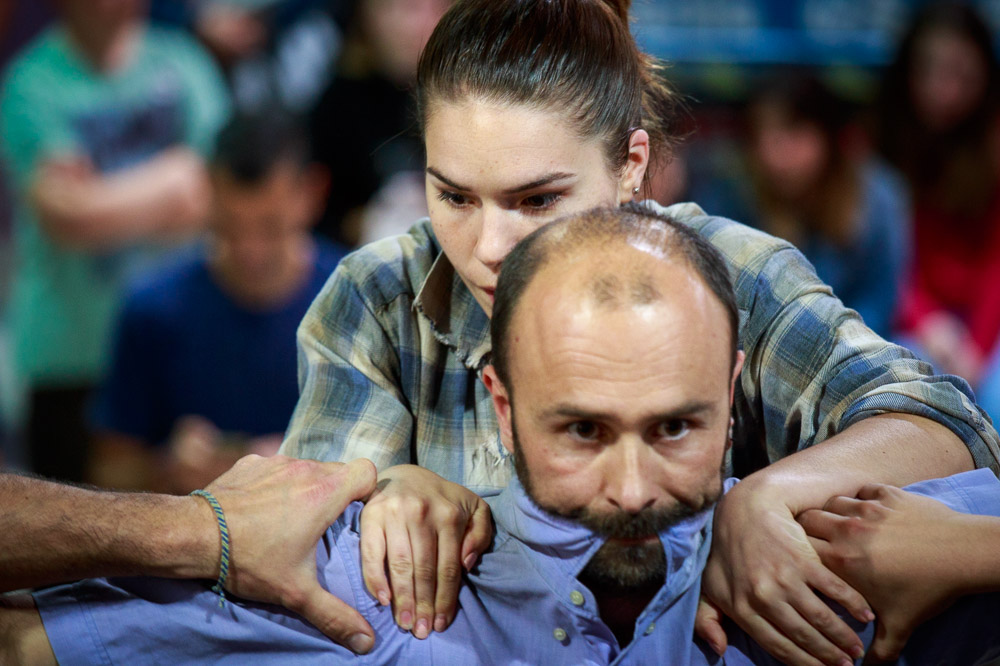 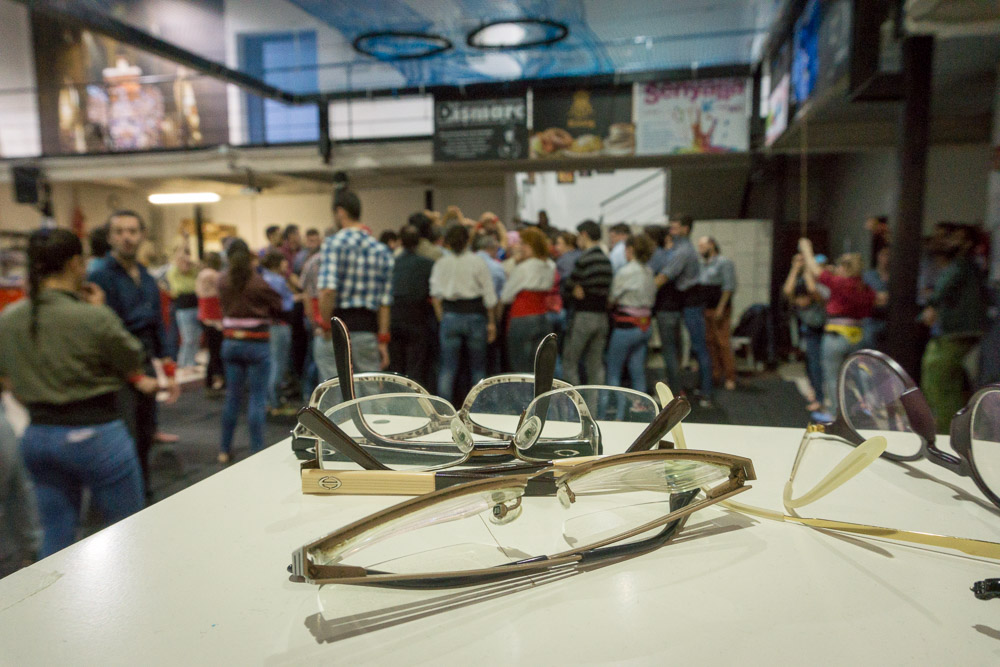 Wearing glasses is not allowed in the tower 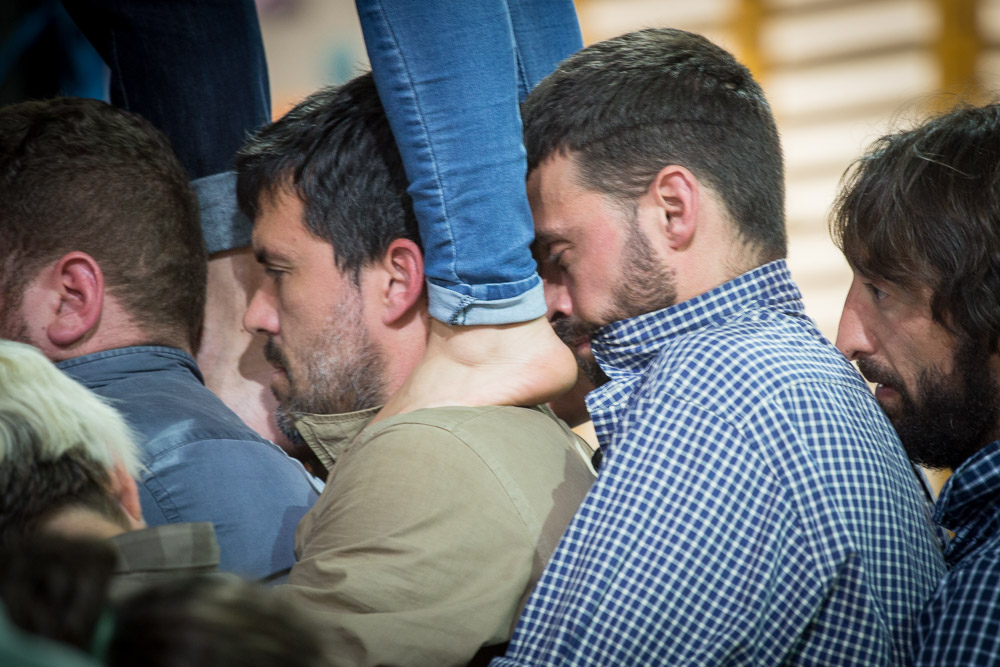 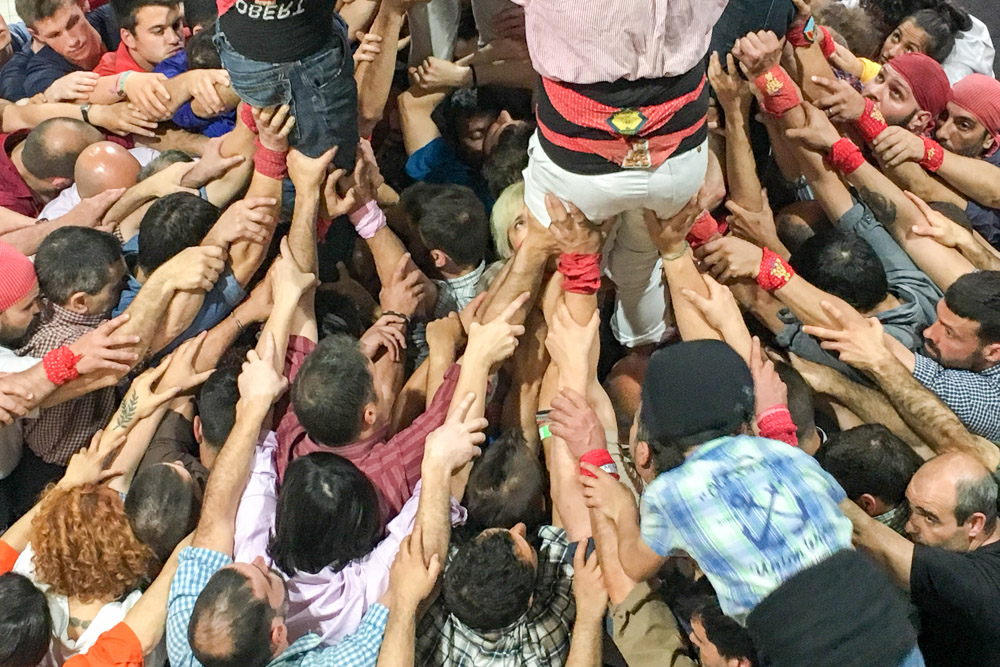 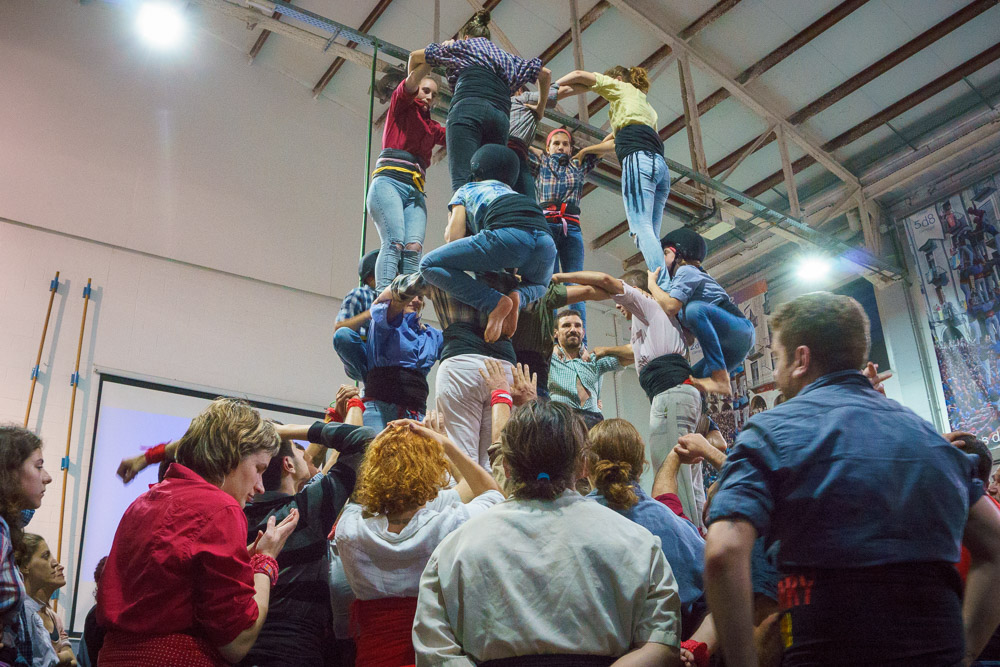 At the flower festival the following weekend, several team members recognized us from the practice. We weaved among them with our cameras in tow, eager to capture their full performance. They all looked different to us now; their dress for the occasion included standard white pants, a blue button-up top, and a black faixa, a thick and long sash wrapped tightly around each of their waists.

The standard clothing serves a variety of functions. The faixa is critical for back support, to hold clothing in place so that skin never slides on skin, and to give climbers something to grab and step on as they climb up and down. Often you’ll see shirt collars clamped between teeth of those within the tower; not only does it help assure no skin-on-skin, but the biting is said to also relieve some pressure on the temples created by enduring the weight of those above.

Other teams vary in colors, but all follow the same premise. Around us were shirts of maroon and others of orange. The other teams had their own towers to build, but on the particularly high ones, they all came together to support each other.

Even though Pete nor I were a part of the official pinya this time, we were right there and could feel it all. And nothing was quite as special as the celebrations that came after the castells were complete. All of the teams together, young and old, big and small, praising their accomplishments and lauding a unique part of their Catalonian culture.

The other teams had their own towers to build, but on the particularly high ones, they all came together to support each other. 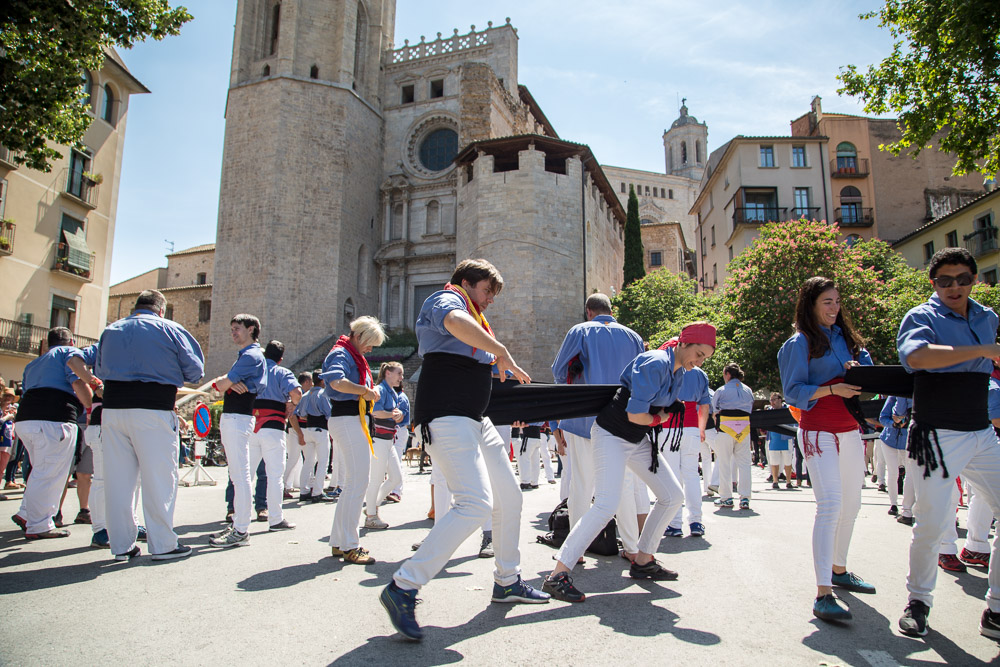 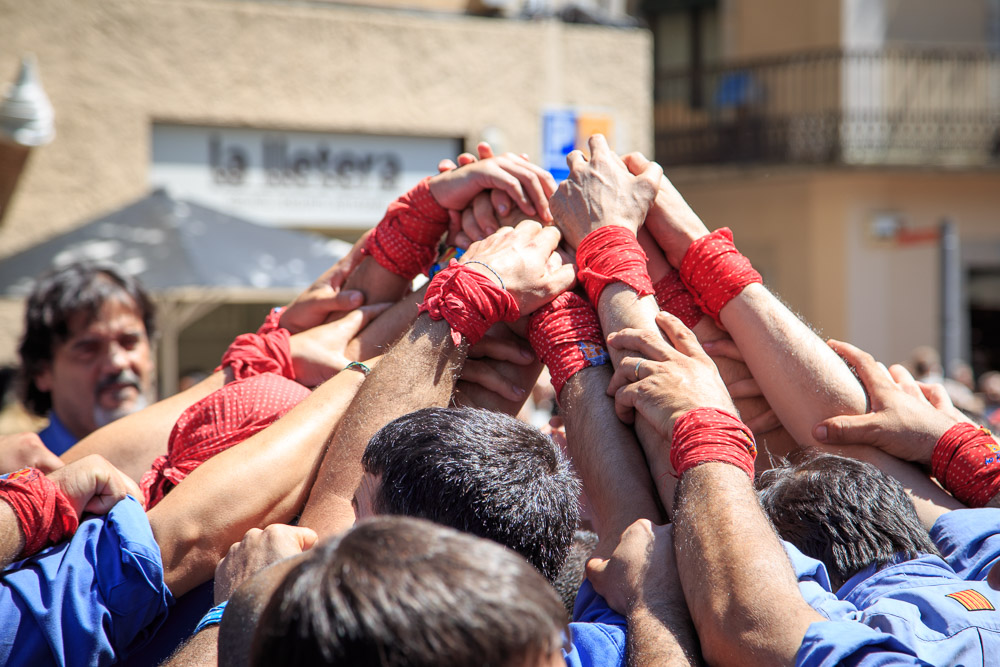 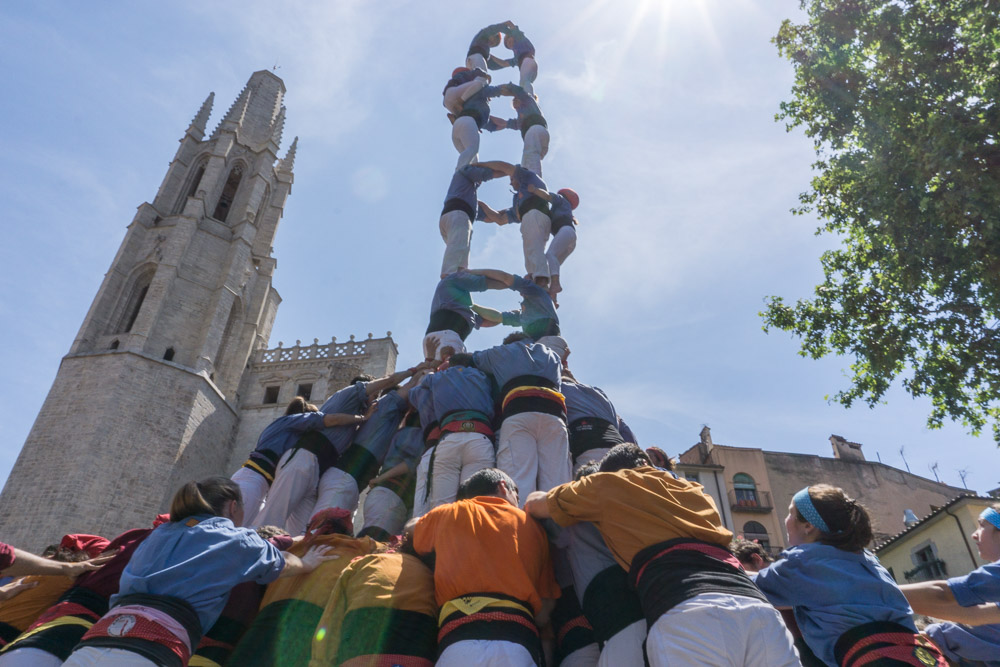 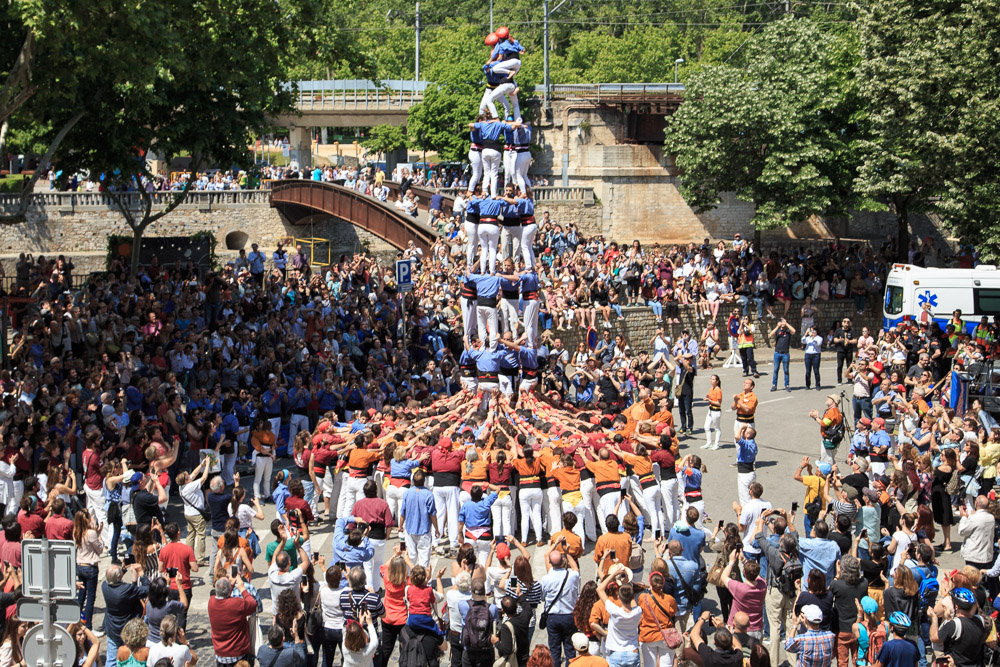 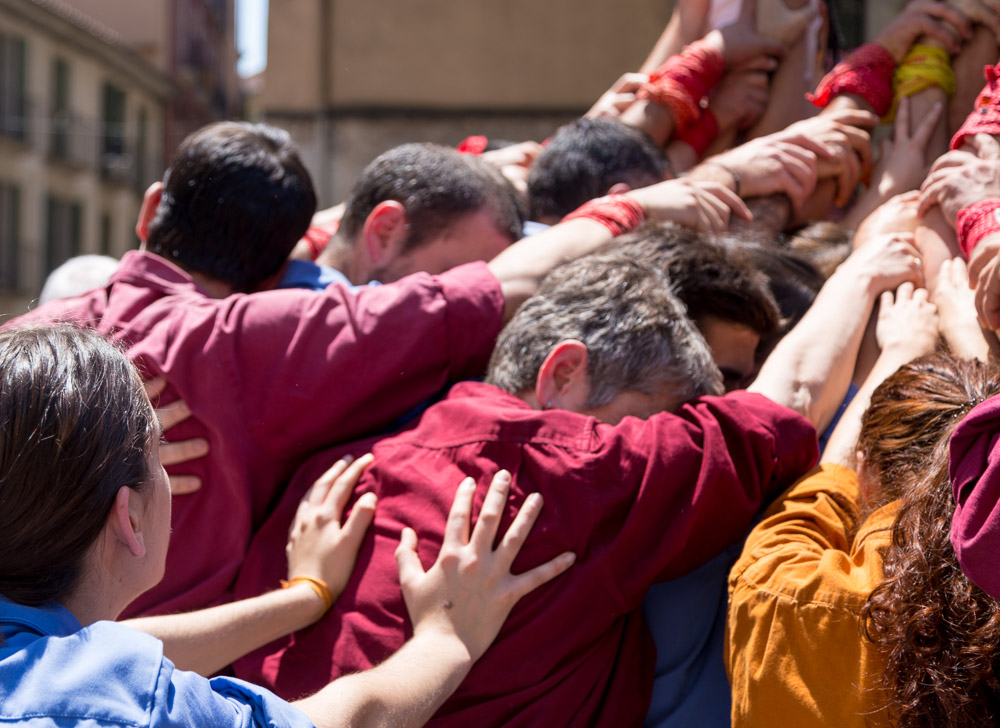 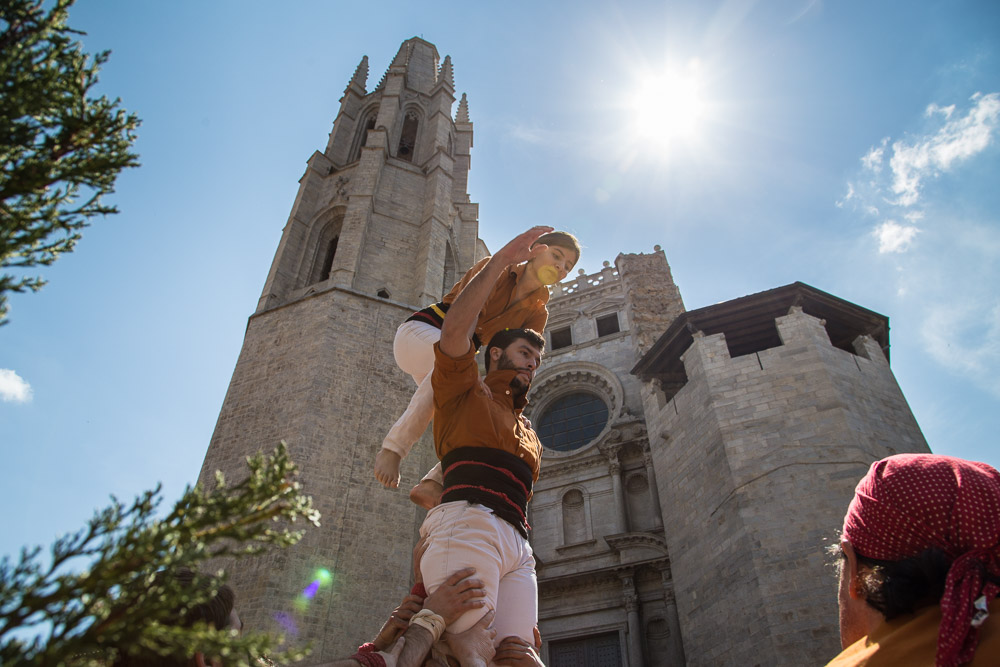 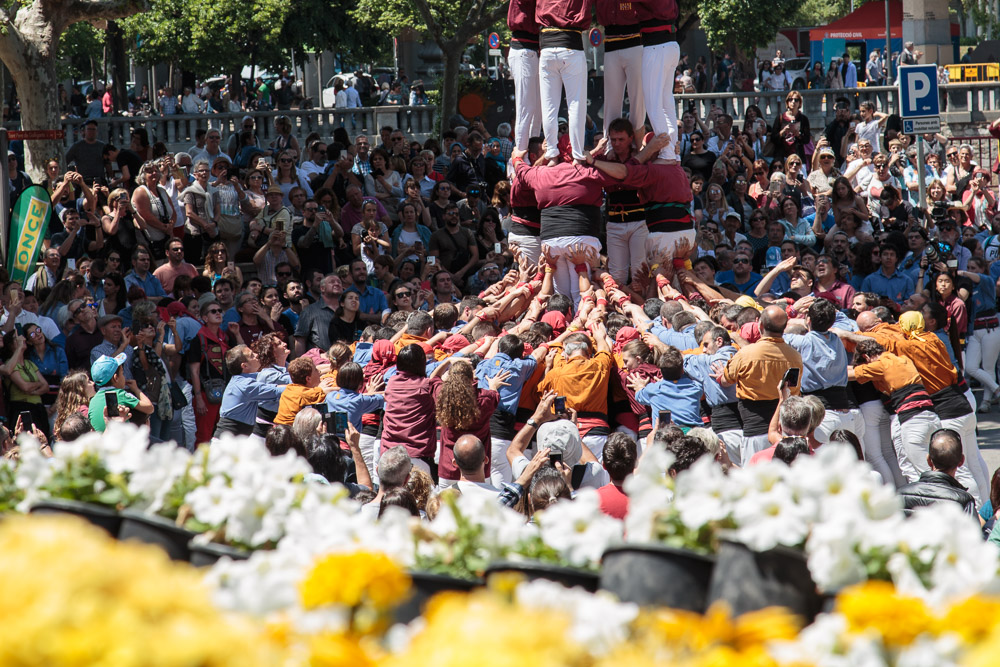 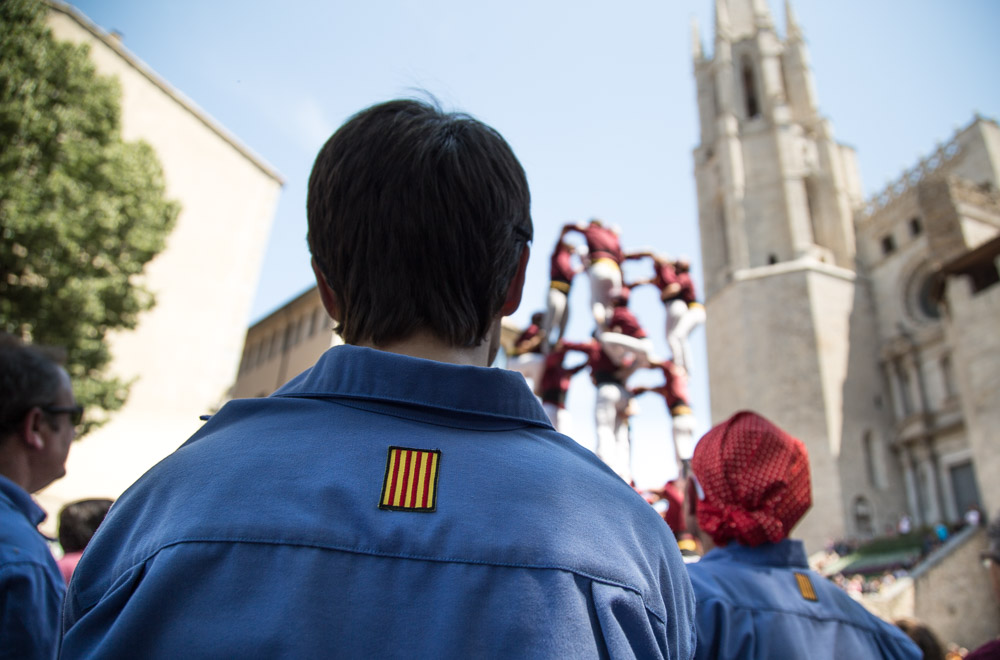 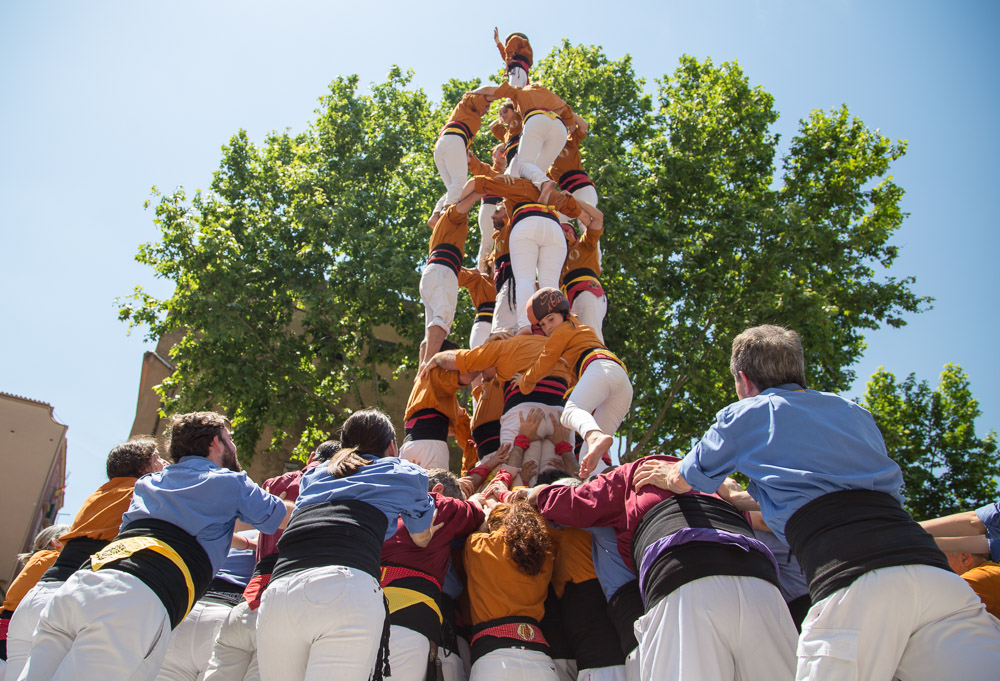 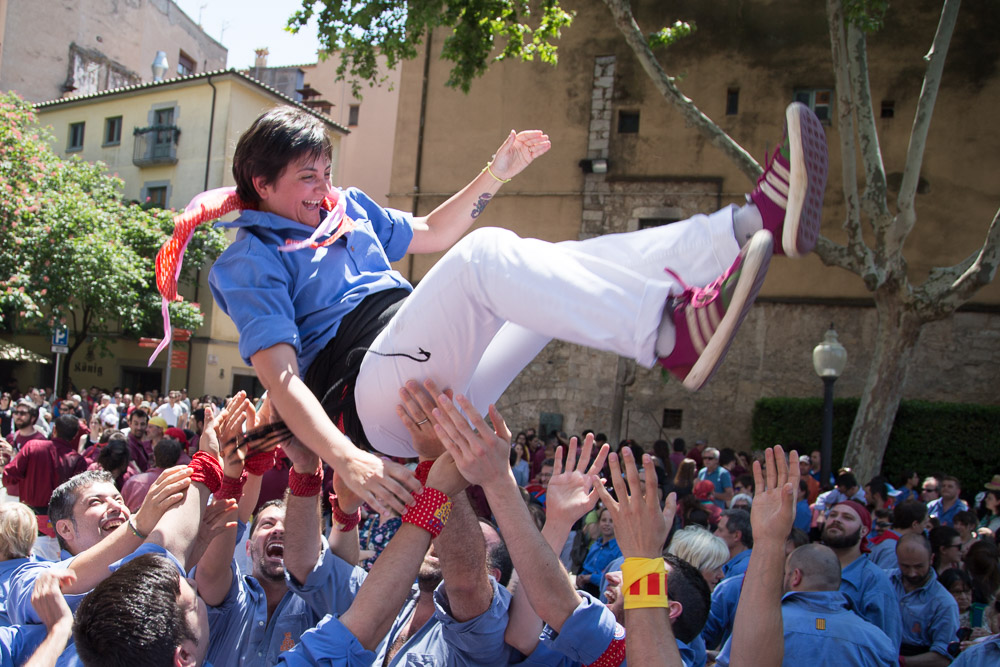 Welcoming the new additions to the team 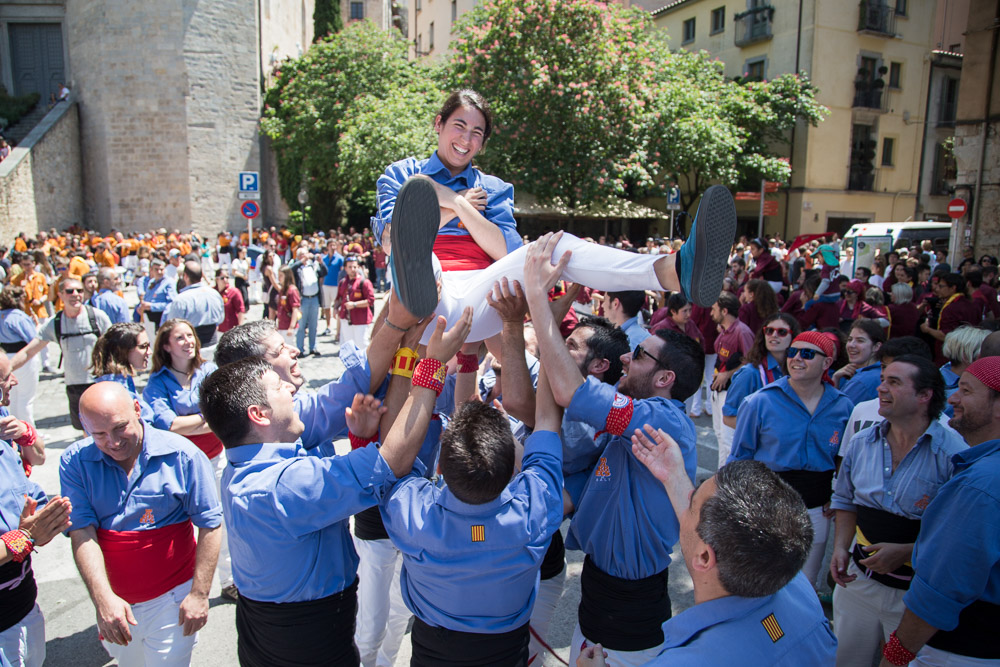 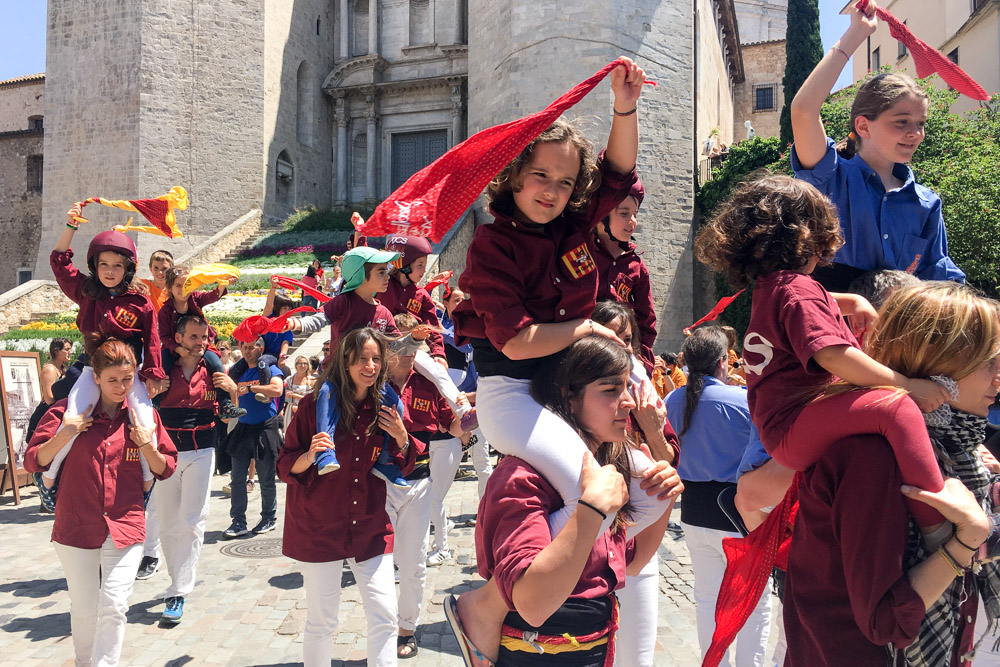 Besides the competition in Tarragona every couple of years – you can watch castells at most major festivals across Spain. Consider contacting teams directly to get their individual schedules!

In Girona during an event for the Fires de San Narcís (November 1st of each year, celebrating Girona’s patron saint), you can catch the human towers actually climbing the steps of the cathedral.

Our travels to Girona were sponsored by Visit Costa Brava. All opinions, as always, are our own.

The (Not So) Pro Travelers Bangkok for Beginners
SHARE 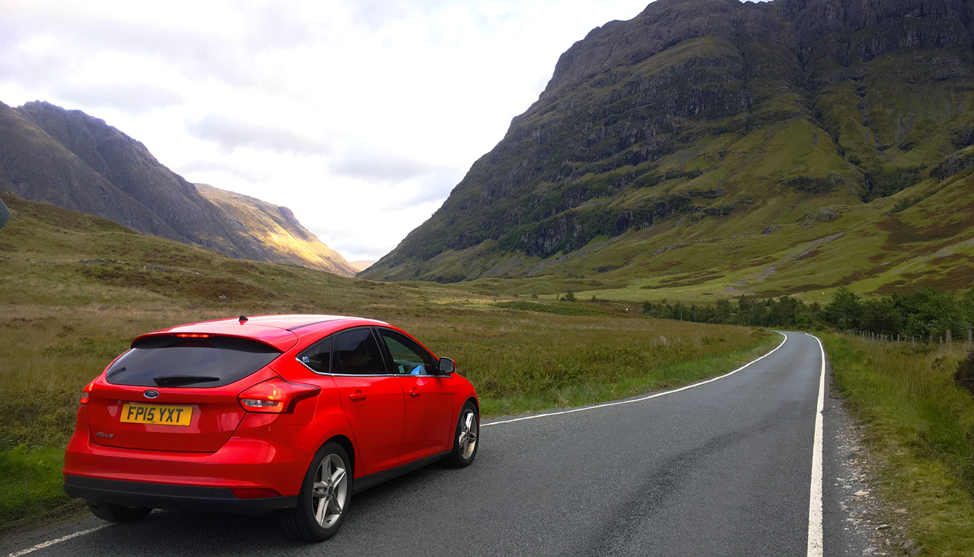 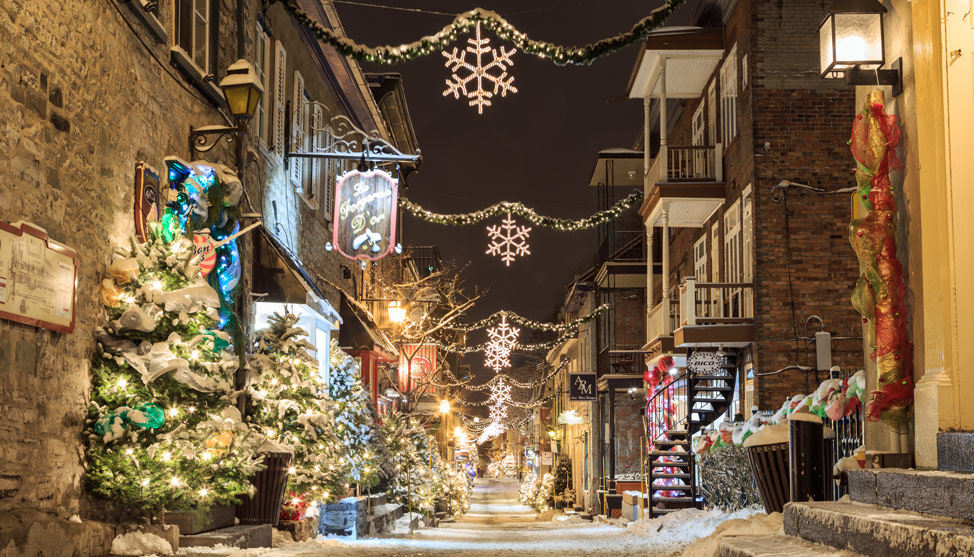