All I can see are feet and calves, feet and calves, moving in a disjointed rhythm in front of me. Light flickers and bounces across the dark and shiny ground out of headlamps used by a few.

We slip in the mud and trip on tree limbs. Our Mayan guide warns us of the ‘quicksand’ on our left which we are sure is really just deeper mud. So much focus on our feet means we get little warning of the tree branches in our path – one smacks me across the forehead and Pete rustles other branches that send droplets of water cascading down. When we stop briefly and the slapping and sucking of rubber soles on the wet ground stops, we can hear the incessant crickets, owls and other nocturnal screamers more aptly. Howler monkeys bellow in the distance. 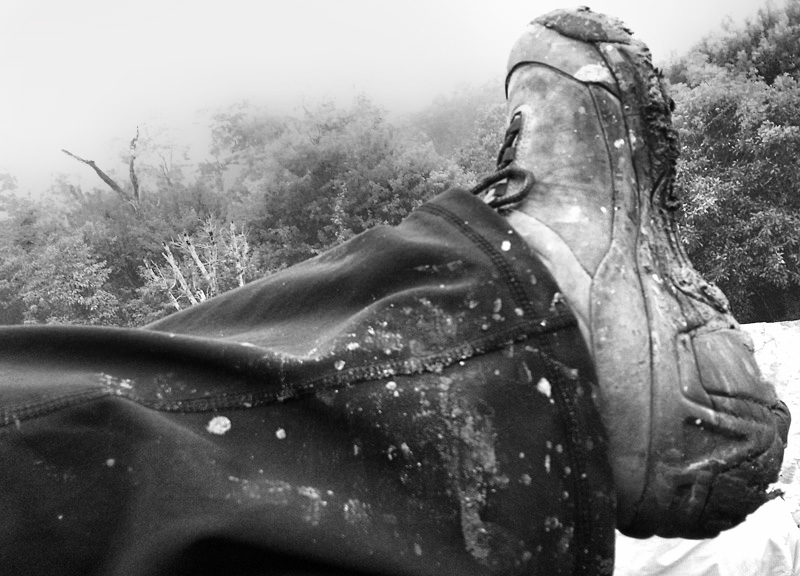 In daylight, the remnants of our muddy trek.

Our guide Abel lets out a bellow of his own, a well-practiced mimic of the tree dwellers we have yet to see in the darkness. He startles a few, including me, and announces his self-appointed moniker of ‘the monkey guide’.

We follow a well-trodden path, taking few turns and making several pauses along the way to keep our group together. Abel is impatient, he wants us to be the first up the main temple to watch the sunrise and the jungle come awake.

182 steps later and we arrive at the top of Temple Four. We are still under the cover of darkness and are very skeptical of our eventual ability to see the sun as the fog hangs heavy. We sit in relative silence. A few rustles of breakfast wrappers and whispers are all that can be heard above the crickets. 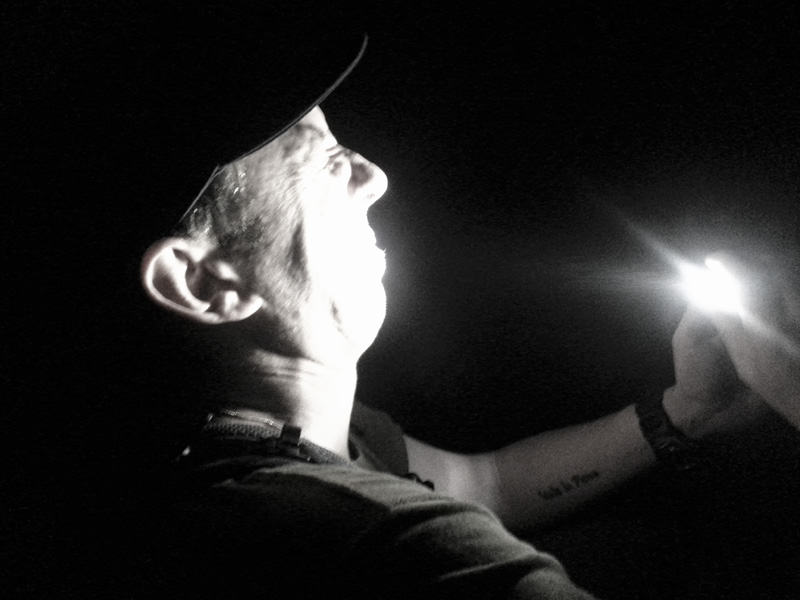 Blinded by the light of a headlamp, as we wait.

Temple Four stands tall, one of the largest in the Mayan world, dating back to the 8th century, and built in honor of the 27th king of the Tikal dynasty. It faces east and sitting on its highest platform, we are in perfect placement to watch the sunrise. If it decides to show.

Some light creeks through small holes in the clouds and we begin to see more definition in the treetops that nearly grace the bottom of the platform and final stretch of stairs on which we are perched. 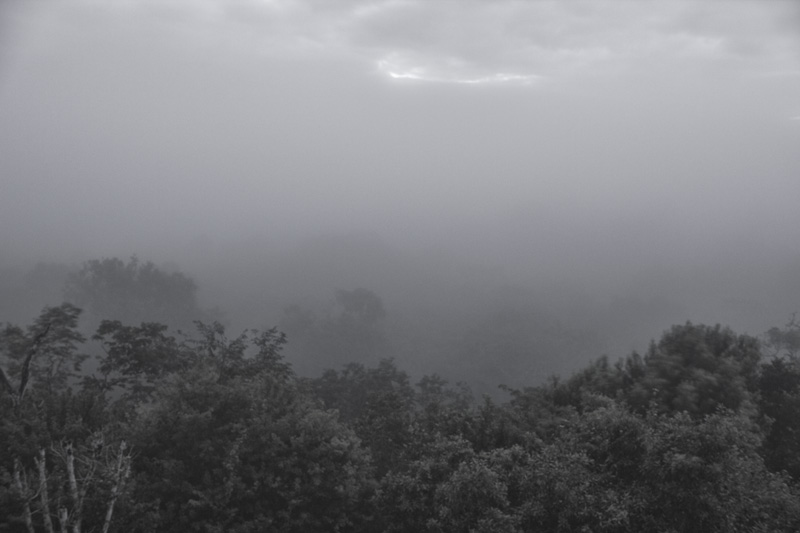 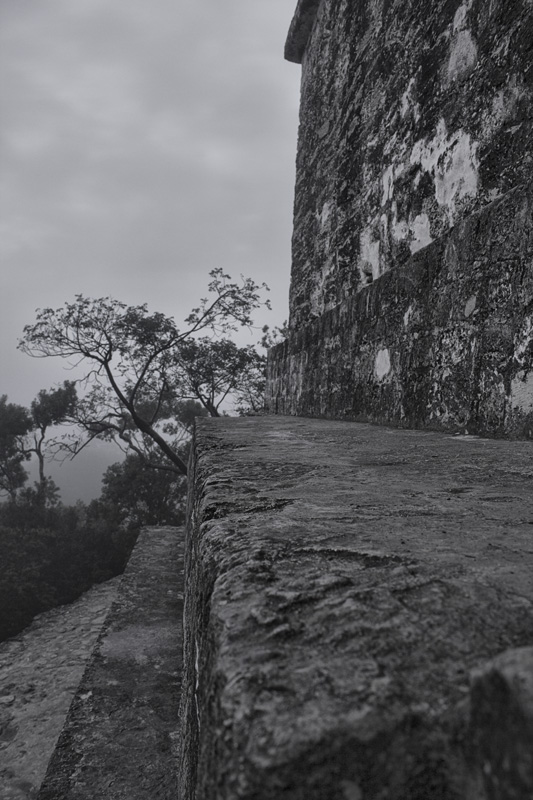 But instead of burning off, the fog gets thicker. The chatter from the on-lookers increases in obvious disappointment of the lack of brilliance we had hoped to see. Another guide quickly steps up and reminds everyone of having the privilege to be where we are, and to take a few moments to absorb in silence. Most oblige and we become aware of what our chatter was covering. Timeless symphonies of nature.

Frogs creek. A bird’s progress can be tracked unseen under the canopy of the forest, only by following the echo of its chirp as it glides along. Later we learn that “Tikal” means: the place where sacred voices can be heard. That, we believe. 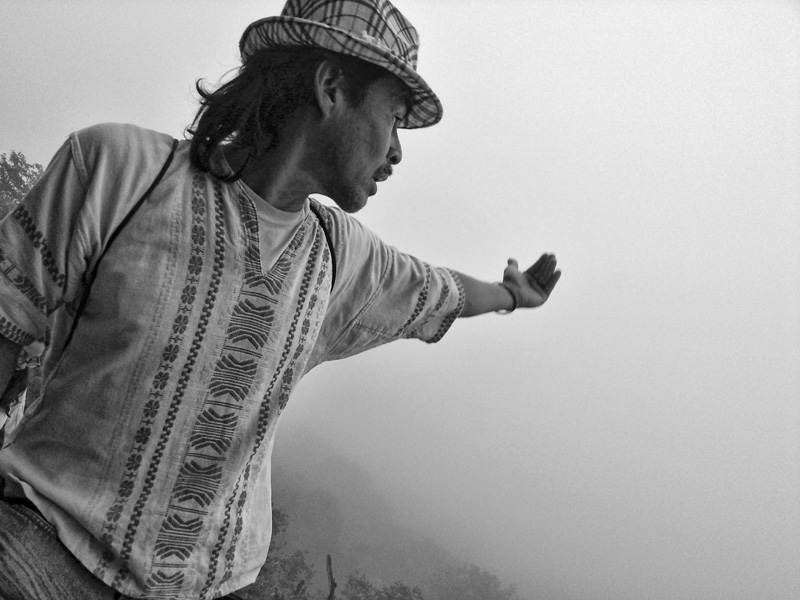 “We have not been lucky today,” Abel says. “The moon was clear last night, but now instead you understand the term tropical rainforest.”

We descend the stairs slowly, set to begin our exploration of a small part of the 16 square kilometres and over 3,000 structures. We are half-disappointed in the start to our morning, but are exhilarated with the surprise that awaits us next.

Kinda the Same, but With Swimming! A Ceremony in the Fog
SHARE

8 Comments... Read them below or add one of your own
contact us
work with us
hecktic media inc.
real-time wall
blog