One of the best things about sitting still in one location for awhile is immersing ourselves in the culture and getting to know some of the locals. We feel totally at home in this small city and a real part of the population. Kids from La BIB run up to us on the street, eager to say hello and give us hugs or high fives. Pete even had one of his English students track us down at our apartment to get some of her homework corrected – we aren’t sure how she found out exactly where we are living – but in this small and busy town, we weren’t really surprised that she could.

One of the most fascinating people we have met is our new friend Alfonso Morales. A regular student of La BIB’s evening classes, I have had the pleasure of helping him work on improving his spoken English. By his invitation on Saturday afternoon, we ventured out of town and across the river to his beautiful hostel Las Granadillas (means passionfruit) for an afternoon of World Cup Soccer, volcano viewing, and great conversation. 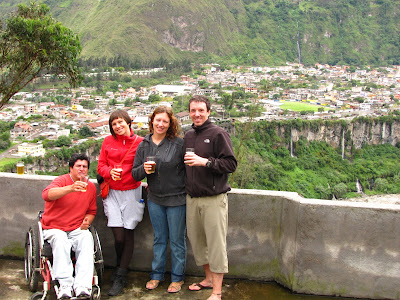 Alfonso has been confined to a wheelchair for 23 years, due to an accident he had while working on the dangerous highways surrounding Baños. Such a tragic situation would break and traumatize most people, however he is one of those amazing spirits that has turned a bad situation into something really beautiful.

He is a paralympian – having competed in the 1996 summer games in Atlanta. He has traveled all over the world – throughout South America, much of the USA, and even to Switzerland (it is VERY rare for someone from around here to be so well traveled). Much of his travels have been to attend (and present at) conferences on overcoming disabilities. He spent two months at school in San Francisco studying wheelchair design, to hopefully bring improvements for people who are disabled and living in locales with difficult accessibility. He even served on the Baños town council for four years, and was responsible for the wheelchair ramps on sidewalks all over town (another rarity in South America).

We were treated like royalty while Alfonso and his mother busied themselves in their hostel kitchen, preparing us coffee, snacks of roasted split bananas with melted cheese and raisins (so good!), and finally some tea made from plant leaves they picked right from their front terrace. Alfonso has some really great stories, and to get to know him in this way has been a real joy.

After such a lovely afternoon, we will even forgive him for citing the Village People as one of his favourite musical groups! We are making him some new CD’s to correct this issue =)

I had written the above portion about how-great-it-is-to-be-a-part-of-this-community right after our beautiful Saturday afternoon. Before Sunday. Before the incident that introduced us to the not-so-friendly-community of our local bus terminal.

Sunday afternoon we decided to be tourists for a few hours and strapped on our hiking shoes. Our destination was Rio Verde – a small village about a 15 minute drive from Baños, and home to one of the top 10 most beautiful waterfalls in the world (as decided by National Geographic). We had seen only the top of El Pailón del Diablo waterfall on a previous venture, and this hike was going to complete the picture.

The bus station was very busy, and the four of us (two other volunteers with Pete and I), took our spot on the sidewalk, waiting for one of the next frequent buses to take us north out of town. While we waited, we were exposed to a little drama that borderlined on the scary.

Buses were backed up outside of the parking lot, and had been for several minutes. Instead of waiting for one of the parking spots to open up, one bus opened it’s doors and the passengers started pouring out. The undercarriage baggage gates were lifted and people rifled through the luggage to find their bags.

Meanwhile, spots started to open up. The first bus behind the unloading bus got impatient. Horns were honking, drivers were yelling. Finally, the small driver from the second bus had enough – he stormed off, and proceeded to get in the face of the driver of the unloading bus.

It didn’t take long before flying curses became flying punches, and the belt of one of the drivers soon also became a weapon. With a bloody lip and nose, the second bus driver returned to his bus, and came back wielding a baseball bat that had been hidden behind the seat. The crowd around us grew, and everyone was very anxious as to what would happen next via the angry young man with the bat. As he approached the unloading bus and tightened his grip, he suddenly stopped short. The driver of the first bus had reached behind his seat too. And the angry young man realized that his bat would be no good against a machete.

That was the end of that. Dirty looks were the last things exchanged, and everyone went back about their business.

Okay then! That was some interesting excitement in our day – the first almost-machete-fight we’ve ever seen. Hopefully, the last!

On the bus we went, off to see this waterfall: 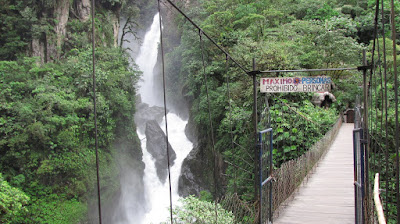 Very purdy! And a good burst of exercise to get there and back. Totally worth all the excitement!

Oh Mama, I miss you.

It has been several days since we heard from Mama Tungurahua. While Her daily entry in Her internet diary still says that activity is high (thanks to potentially troublesome ash that is still being emitted every so often), She has become very still and quiet. No more window rattlers, not even a murmur. The excitement of living with an active, life threatening force of nature is apparently over.

Sigh. It was fun while it lasted.

While at Alfonso’s on Saturday, we did get to see one of Her massive ash emissions. If only it wasn’t for the damn clouds, we could have had some amazing pictures. 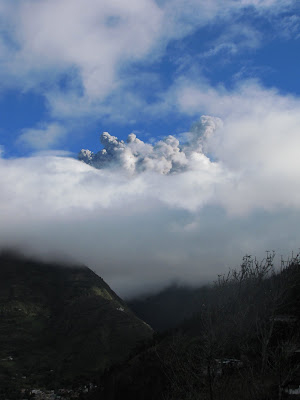 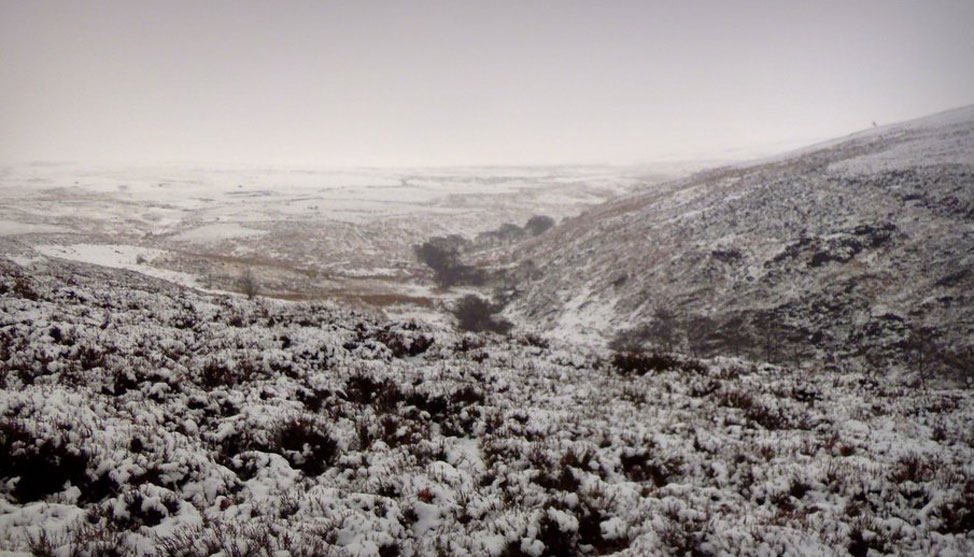