We reviewed our itinerary just a few days before we left for Maui, and while I didn’t quite say “no” to the concept of running off a mountain when it was first suggested months prior, I was hesitant. Those that have been reading this blog from the very beginning may remember our frightful excursion in Argentina.

That time where we watched as one man chickened out last minute, and then saw a solo jumper actually fall from the sky.

Also, at that point in our travels, my Spanish wasn’t good enough to inquire about the things that made me so nervous about the flight – like that damn beeping from the contraption that measured wind speed and other things. Throughout the flight, I thought that the rapid increase in tone meant we were in trouble, when it actually just indicated when we were in strong thermals (a good thing).

I was the last one off the mountain that time, and the first to land. (I’m sure my tandem guide could sense my nervousness.) And as we landed, I said emphatically: Never. Again.

But then came the certain passage of time and its miraculous ability to dull feelings and fade memories.

We watched as one man chickened out last minute, and then saw a solo jumper actually fall from the sky. 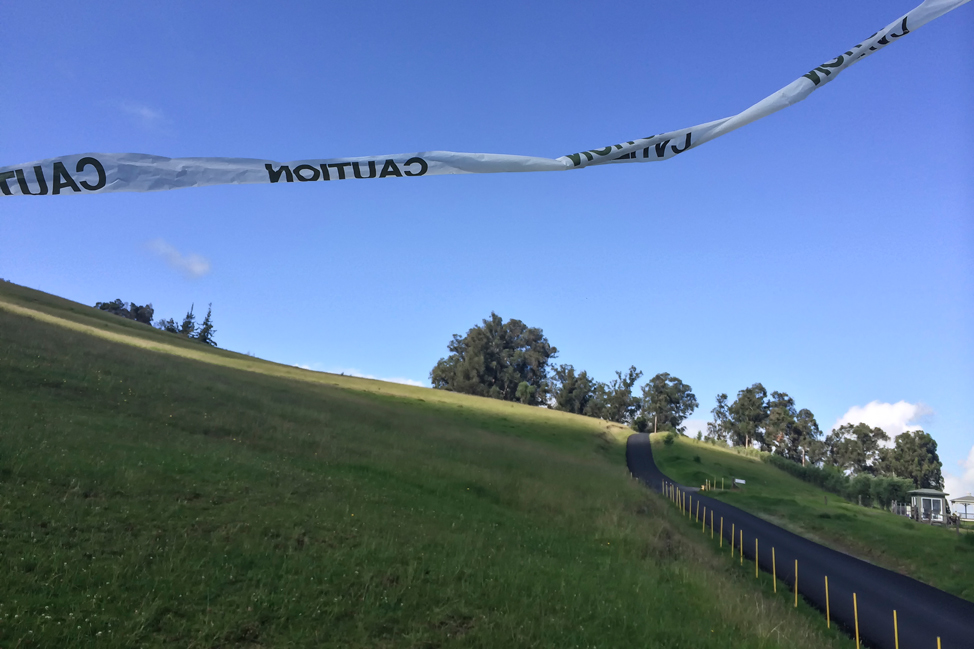 I couldn’t look down on the way up.

My eyes fixed forward for the long drive up the slopes of Haleakala with a dramatic series of sharp switchbacks. The talk in the van was focused on what had happened just a day prior, where a solo jumper had somehow got tangled in tall trees on the slope just after take-off. He dangled for an hour until being rescued by helicopter.

“Driving a wing is like driving a car,” our guide Dexter said incredulously, “it’s very easy to avoid the trees.” Without knowing the details to the story, it seemed hard for him to believe.

Dexter had such a calm and smooth way of talking that I believed every word out of his mouth (which is a vital quality to have when escorting people off a mountain). Soon only some nylon and string would keep gravity from hurtling my vulnerable self into the ground – so I hung on his every soothing word.

Soon only some nylon and string would keep gravity from hurtling my vulnerable self into the ground.

My courage continued to rise as the van rolled to a stop. Unlike that time in Argentina where the jumping-off point gave way to a cliff-face, this slope was gentle, the view before us lush and inviting. We weren’t surrounded by scores of other nervous first-timers, and we got to watch a man jump solo for the very first time. I was encouraged by the gentle coaching of Dexter and the ecstatic hoots and hollers as the graduated new-jumper soared through the air and controlled his own movements through the sky. I couldn’t imagine a greater freedom.

Well, hell. I wanted that. My nervousness had turned to sheer excitement.

But Pete would go first. 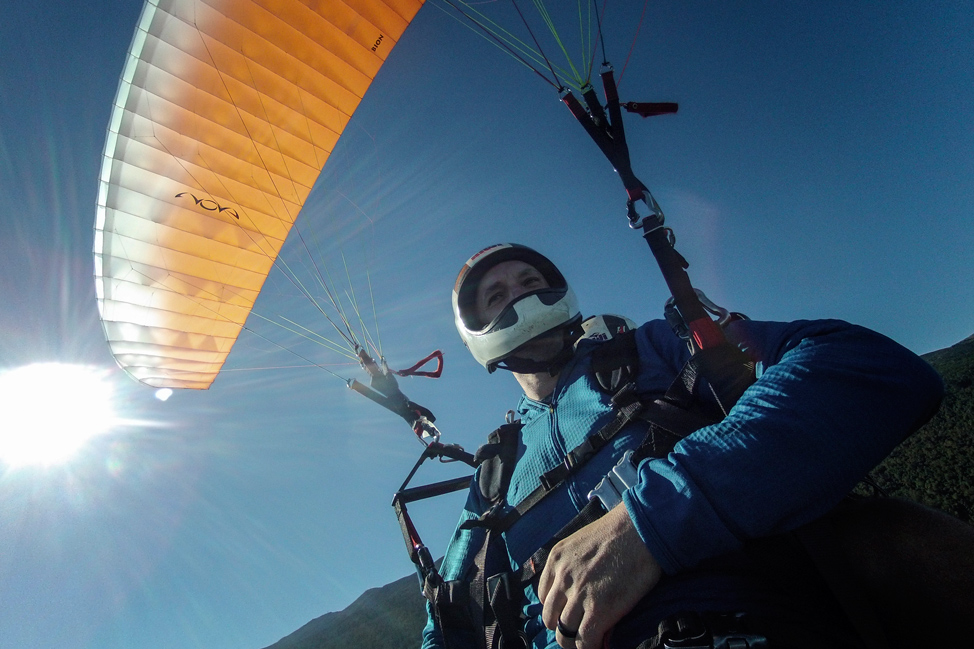 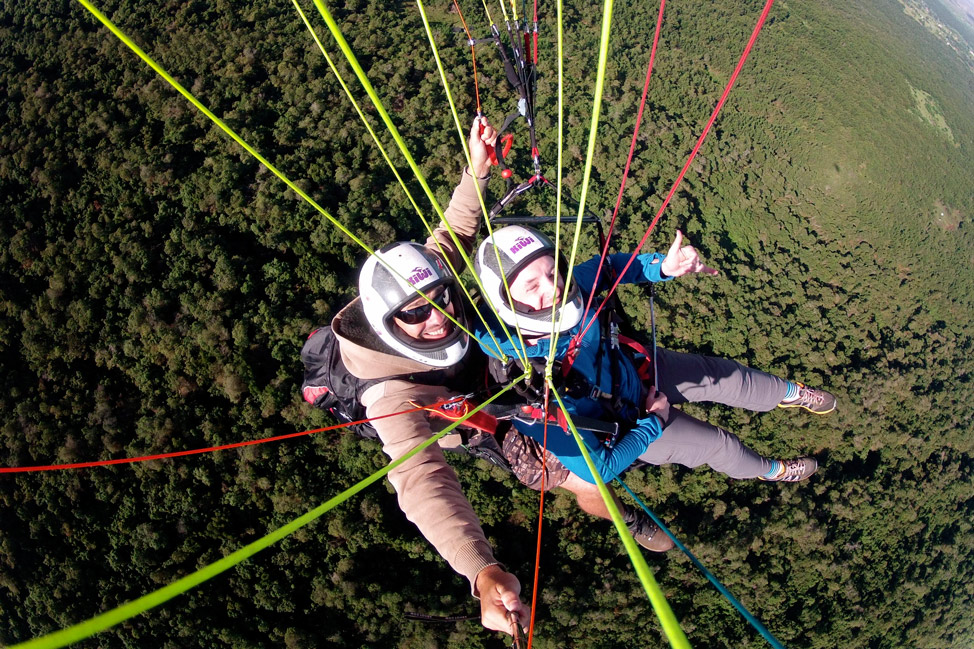 And on my lift-off seconds later, it felt so effortless and, quite literally, uplifting. So relaxed I was in this irrational act of running off a slope that I required Dexter’s urging (yet calm) insistence to get going. “Run faster, please!” 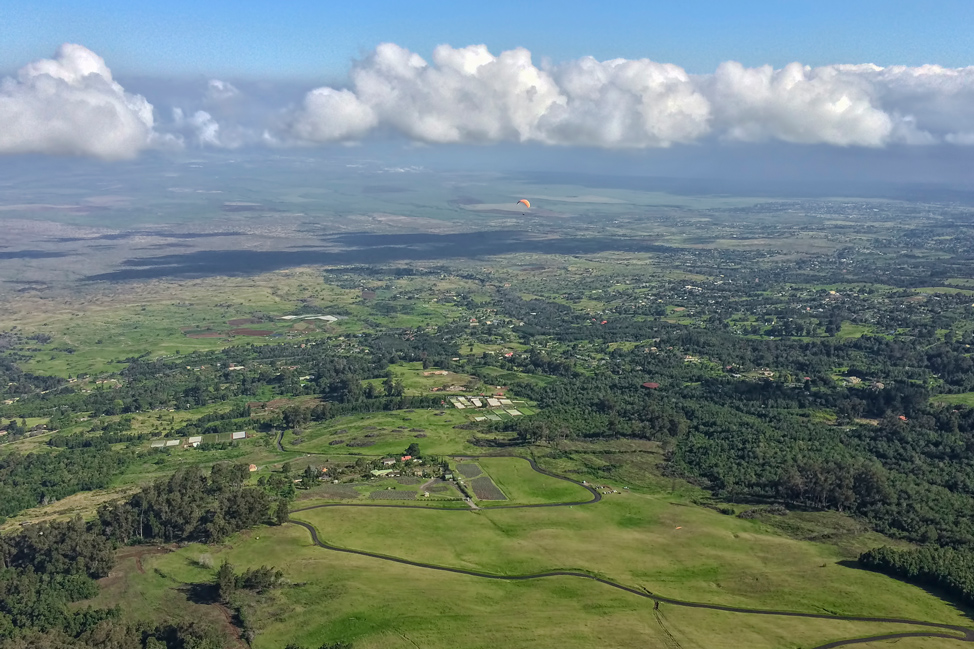 After a quick detour to spot the wing still caught in the tree from the accident the day before, we went back to just enjoying the freedom of flight and the view before us. It was hazy, a bit, with the clouds far enough away not to be troubling but to slightly dull the kaleidoscope of blues and greens before us. I looked down to watch Pete’s progress, and saw him spin at a sharp angle, turning and turning while descending.

“I DO NOT want to do that,” I insisted to Dexter, as he explained they were enjoying a spiral dive. 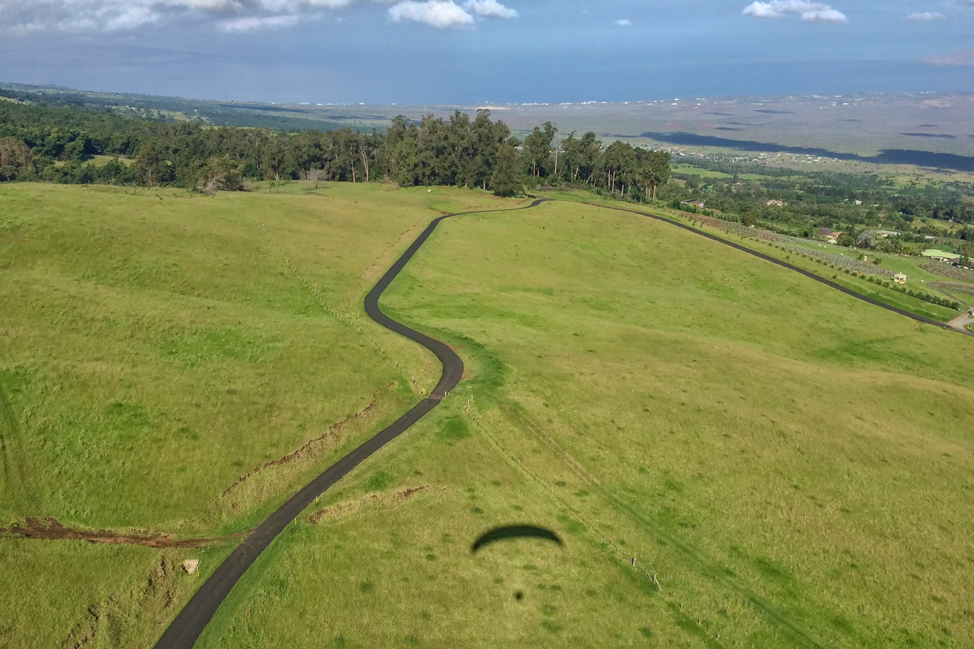 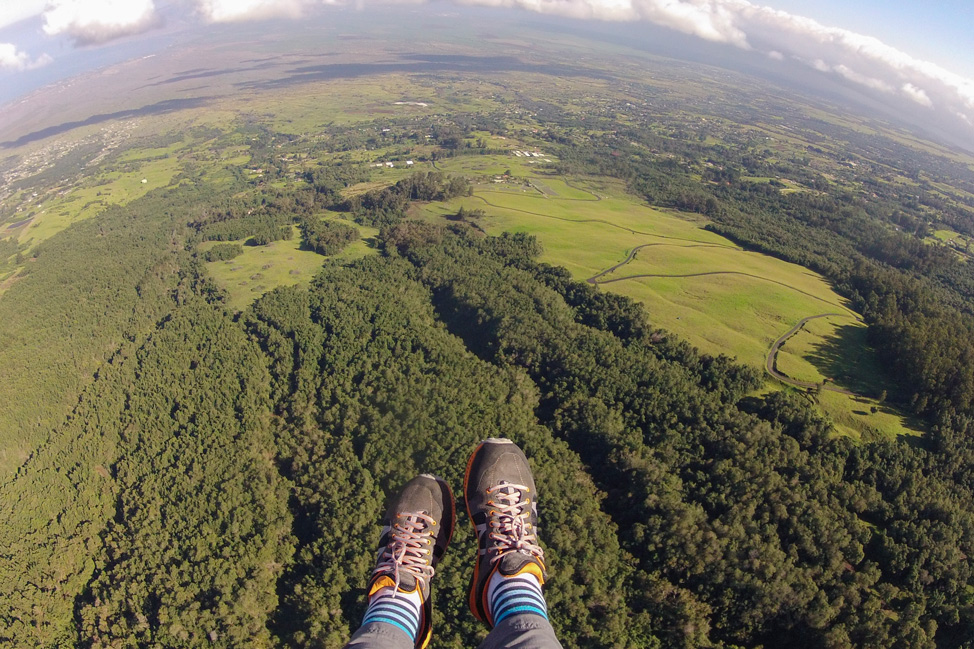 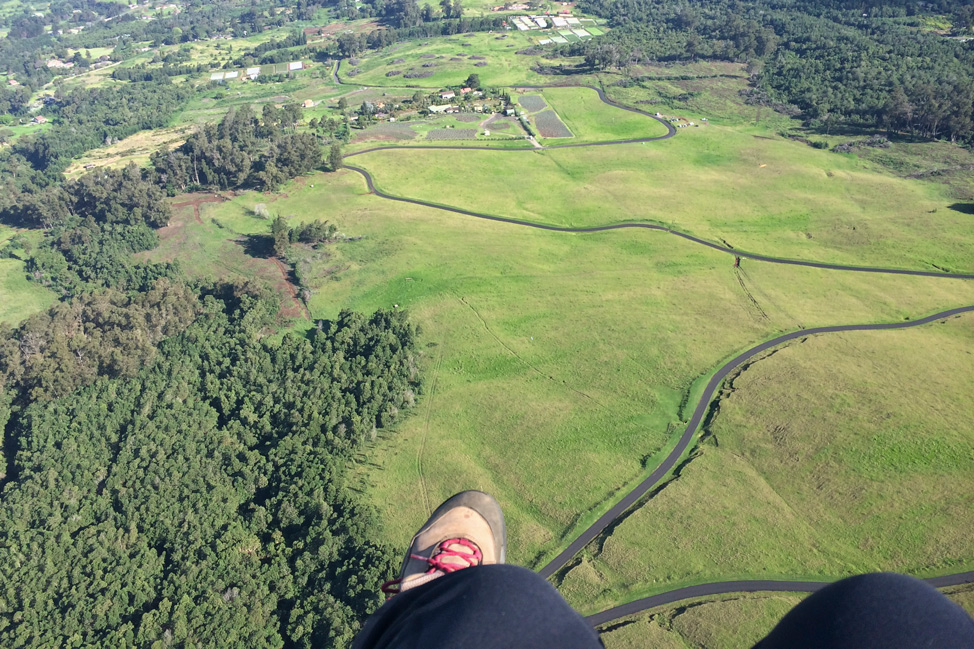 It had been less than ten minutes the ground, far quicker than the preparation and drive to the top. But I was ready to do it all over again right there – Dexter had done the impossible for me and made the experience no frightful than an elevator ride.

(He might even be able to talk me into a spiral dive next time….)

We highly recommend both Dexter and Paul (Pete’s tandem guide) from Proflyght Paragliding for an excellent flight tailored to your level of chickeness. 🙂

Many thanks to the Maui Visitors Bureau for having us. As always, all opinions are our own.