Guest Post: The Beaches of South and Central America

South and Central America are coming of age as a year-round holiday destinations, but first-time visitors can often find themselves overwhelmed by the sheer size of this huge are. The choices can be daunting, but a little homework should help you to narrow down the options and find the destinations that tick all your boxes. From backpacking in Costa Rica to ritzing it up in Rio, here are a few ideas to get you started. 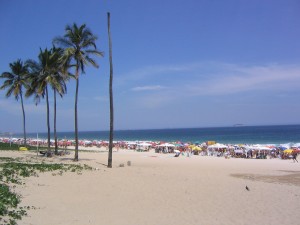 Think of a beach in South and Central America, and the first names that spring to most people’s minds are Copacabana and Ipanema. Rio’s legendary playgrounds of the rich and infamous have one of the world’s most vibrant cities as their backdrop. Yet, thanks to cheap flights and budget hotels, flying down to Rio doesn’t have to be out of your range. People-watchers can check out the talent on Ipanema, football fans can size up the next generation of Ronaldos and Peles on the 4-kilometre stretch of flat white sand at Copacabana, surfers can ride the perfect wave at Arpoador, and lovers of old-style sophistication can slope off to the Copacabana Palace for a caipirinha or two before bed.

Costa Rica has a reputation for fabulous beaches – not surprising for a country which has nearly two-thirds of its border outlined by the coastlines of the Pacific and the Caribbean. Offering a huge variety of destinations and attractions, from the lively, bohemian surf resorts of Montezuma and Mal Pais and the ecotourist paradise of Tortuguero to the tropical rainforests and coral reefs of Manzanillo and the mild waters and virgin beaches of Tortuga Island, the hardest part will be choosing where to base yourself. If you’re looking to party with the backpacking crowd, head for Jaco, less than two hours from the capital San Jose. For picture-postcard perfection and a more peaceful vibe, check out Manuel Antonio National Park on the Pacific coast.

Margarita Island, off the coast of Venezuela, is known as the Pearl of the Caribbean. Discovered by Christopher Columbus in 1498, plundered by the Spanish for its pearls and bombarded by pirate attacks, the island finally became the first permanently free territory in Venezuela in 1814 after a successful bid for independence. Now it is a paradise for international travellers, attracted by stunning scenery, excellent hotels and duty-free shopping, as well as around fifty fabulous beaches ranging from the popular Playa El Agua to the unspoilt La Galera. Margarita can be reached by ferry from Venezuela or by flights to the international airport at Santiago Marino.

Chile’s long, rocky, often cool Pacific coastline is not ideal for traditional beach activities, so the most popular resorts are in the milder central region, which is also within easy reach of the capital Santiago. One of the most interesting is Vina del Mar, founded in 1874 as a weekend retreat for the wealthy elite from Santiago and nearby Valparaiso – the name means ‘vineyard by the sea’ – and now one of Chile’s main tourist attractions. Visitors flock to the Municipal Casino, built in 1930, making it one of the oldest gambling establishments in South America, while international song and film festivals have put the town on the cultural world map. Renaca Beach is packed out during the summer months (December-February) with a great selection of hotels, lively nightlife and some wonderful seafood restaurants.

So the message is – don’t be daunted by South and Central America. Start small and go with the flow – you’ll be amazed how much ground you can cover!

This post was written by Paul Simmons, travel writer. Following in the footsteps of Canada’s explorers.